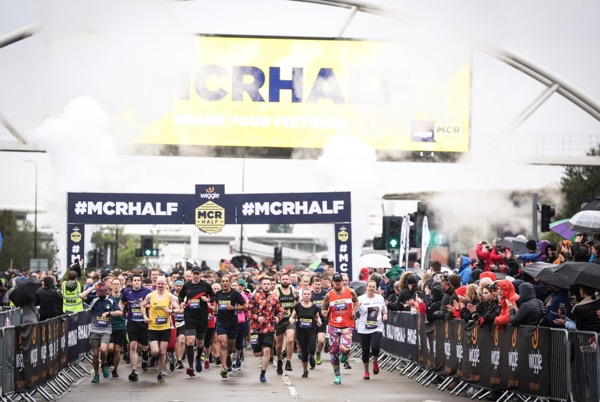 Wiggle Manchester Half stands up to big billing

It was a weekend of running, that’s for sure, and while there were no world records broken, and the rain barely drew a breath in the North West, the Wiggle Manchester Half Marathon more than held its own with an exceptional turnout of over 12,000 participants.

Organisers had warned of the expected downpour and this turned out to be the case at the latest staging of the 13.1 mile event yesterday (Sunday 13 October). Starting and finishing at Lancashire Cricket Club, the field had to familiarise themselves with a modified route that included a new section through Chorlton Village after passing through Stretford, Sale and Old Trafford on the way back to the finish line.

Taking full advantage of what is known to be one of the fastest courses around was Derby’s Ben Connor, who enjoyed victory in his first competitive half marathon of the year. Connor, fourth at the Vitality London 10K earlier, this year, grabbed first in a course record of 1:03:12, close to one minute ahead of Wayany Gherbeilasie of Shettleston Harriers. Frank Baddick was third in 1:04:18.

Connor, who had been competing at the World Championships at 5000m, commented after his victory: “Straight back into racing after @iaafdoha2019 . Another race next weekend then back to the sun for a training block.”

Lily Partridge looked to be on the path back to her best as she scored what was comfortable victory in 1:13:44, with Jip Vastenburg (1:14:17) and Elinor Kirk (1:16:12) her closest competitors. Reflecting on what has been a tough part of the year, Partridge commented on Instagram: “Last 6months running wise has been so unbelievably shit trying to shift an injury that I could barely explain nevermind deal with.”

The Manchester Half’s Twitter page abounded with messages of thanks post-race, with many runners speaking of their enjoyment even in the tough conditions. Many will be looking to take this momentum forward and compete in the Manchester Marathon in 2020 on Sunday 5 April.

Further information on this is available here.