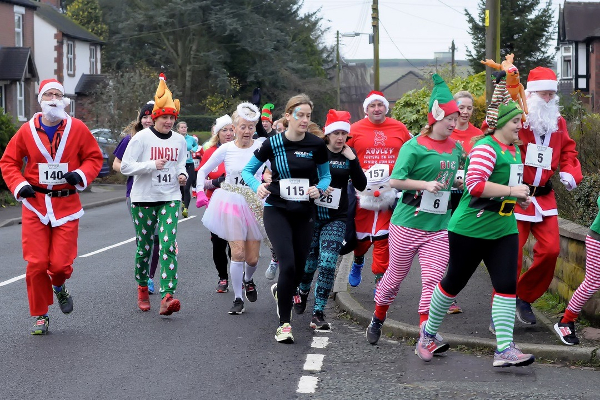 The community raced into action at the Audley Festive 5K on Sunday (29 December), raising funds for a global charity committed to feeding hungry children living in poverty around the world. This small event showed it had a big heart at its debut.

Audley Rotary Club joined forces with Audley Striders Running Club to organise this fundraising event on behalf of Mary’s Meals who aim to provide every child with a daily meal at their school. They work in 18 countries including Kenya, India, Ethiopia and South Sudan.

A 1K Junior Fun for U11s began at 10am followed by the Festive 5K at 11am with both races being held at Audley Cricket Club. Festive fancy dress was in evidence as many runners continued the Christmas theme before the New Year.

There was a close contest at the head of the field as a breakaway group of four pushed each other on an undulating course. Newcastle (Staffs) AC’s Bruce Johnson lead early on before being overtaken by teammate Ben Bewley at around two miles. Bewley went on to win in 17:29. Not far behind was Ben Brereton who finished second in 17:38 followed by Dave Rushton of City of Stoke AC in 17:47.

A strong run by Sarah Fletcher saw her become the first female in 22:09. Emily Hunton was second in 24:34 and Emma Ratcliffe third in 24:42.

There were commemorative T-shirts for the finishers and medals provided by the Rotary Club. Around £2000 was raised for Mary’s Meals that will help to feed 145 children for a year.

The organisers would like to thank everyone involved in making this new event a success and plan to make next year’s bigger and better.