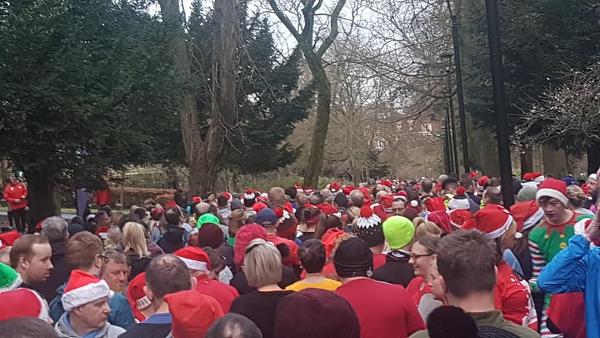 It was a most wonderful turnout at this most wonderful time of the year at the Christmas Day Walsall Arboretum parkrun (25 December). Over 700 people got the Big Day off to a running, jogging or walking start ahead of the annual indulgence.

Santa made an unscheduled stop after his hard work the night before to join volunteers on parkrun Christmas morning at Walsall Arboretum. Santa along with photographer Ron Reynolds were part of a bumper turnout at this Victorian public park, who waited excitedly for the special festive event to begin.

Santa hats were on display and others wore Christmas fancy dress as they set off at 9am from outside the Joseph Leckie Sons of Rest building. They followed a three lap course on tarmac paths in a clockwise direction around the park, passing the lake, visitor centre and bandstand whilst marshals cheered them on.

This was the morning to be jolly and they took full advantage of the flat scenic route and atmosphere as they completed the loops in dry conditions. The sheer weight of numbers resulted in a queue in the finish funnel but that didn’t bother the parkrunners who enjoyed the event whilst appreciating the efforts of the core team who made it happen on Christmas Day.

There was a Christmas present in the form of first place for Pravesh Patel of Wolverhampton & Bilston AC who finished in 16:23: and another for Kelly Butler of Birchfield Harriers who was the first female in 18:17.

A record 739 people celebrated Christmas Day - the biggest attendance in the event’s history. However the real heroes of the day were the 39 selfless volunteers who made this special day possible.