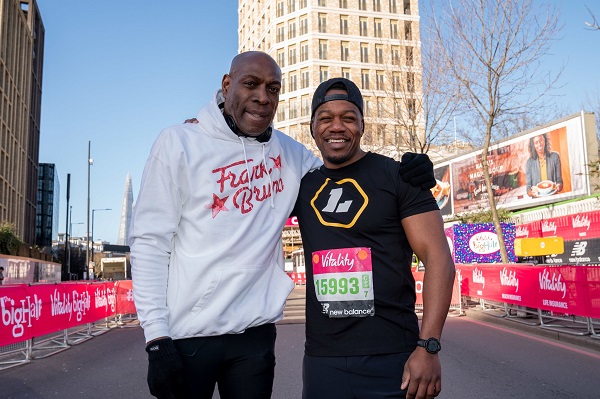 Frank Bruno was among those #MovedbyLondon

The 1995 WBC heavyweight boxing champion, Frank Bruno, was one of the most famous faces involved in The Vitality Big Half on Sunday (1 March). In three short years London Marathon Events has grown The Vitality Big Half into one of London's biggest community and charity fundraising events through the campaign #MovedbyLondon

Frank Bruno undertook the 13.1-mile challenge for The Frank Bruno Foundation – a charity he set up to provide support, encouragement and motivation to succeed for those experiencing or recovering from mental ill-health. After powering through to finish in 2:47:01 despite hip pain, Bruno said: “I want to encourage more men to talk about their mental health issues. It’s OK to say you’re feeling down and talk about it. If you keep your mind strong you can do anything you want to do. You need to look after yourself and make the most of your time here.”

Men's mental health was the catalyst for Nii Lartey and Joel Thika to form Run With Purpose (pictured below) and the community group took part for the first time this year. The collective was established to help men overcome mental health issues through running and socialising. They said afterwards: “It was amazing to run The Vitality Big Half today. Run with Purpose is about tackling male depression and creating a safe space for men to run and talk about their problems. It’s great to run through London; I’ve only ever heard of some of these places on the Monopoly Board. Seeing other brothers running spurs you on too.”

Another group making a big impact was the Emancipated Run Crew formed by sisters Denise and Jules Stephenson and their friend Trojan Gordon to take a stand against what they saw as the lack of representation in running. They decided to create a running club for people of all backgrounds and abilities but particularly for the black, Asian and minority ethnic community. “We run as a collective, support each other and also reach out to new people,” they said after the race. “We’re here to champion each other and ourselves and bring diversity to running. We want London to be represented at events like The Vitality Big Half.”

The Vitality Big Half programme also includes The New Balance Big Relay that saw teams of four take on the half marathon course. The Little Half offered the opportunity to run the last 2.3 miles of the Big Half course and the free-to-enter Vitality Big Mile took place for the first time after the event was cancelled in 2019 due to very high winds.

"It has been an incredible day of records," said event director Andrew Smith. "We had two course records in the men's race and the men's wheelchair race, as well as more Vitality Big Half finishers than ever before by several thousand. The atmosphere at The Vitality Big Festival was fantastic, especially at the finish of the first ever Vitality Big Mile. It was great to see so many young children enjoying the event and wearing their medals with pride.”

You can register your interest for The Vitality Big Half 2021 here.

Images courtesy The Vitality Big Half