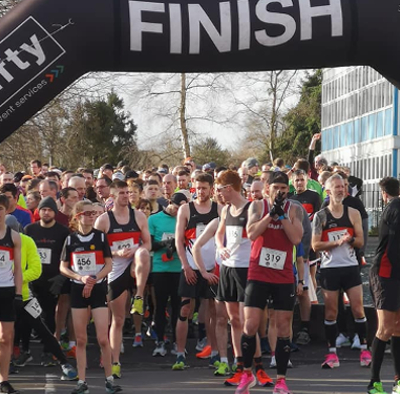 Around 500 runners took part in the inaugural Marches School Oswestry 10K and Fun Run yesterday (Sunday 1 March) on a beautiful morning in Shropshire. The favourable weather conditions contributed to a successful outing for this celebratory event.

The race was held to commemorate Oswestry Olympians 40th anniversary and the support it received enabled the organisers to re-establish the route after many years absence. It was staged in the market town of Oswestry which is close to the Welsh border and appropriately, arranged for St David’s Day.

There was a 2K Fun Run at 8.15am then the main event at 9am from The Marches School. Runners made the most of the mainly flat traffic-free course, apart from a few gentle hills, that winded its way around this historic town, home to WWI war poet Wilfred Owen. They passed half-timbered buildings and St Oswald’s Church as residents enjoyed the sunshine as they applauded them for their efforts.

Sean Merryweather of Wrexham AAC took advantage of the route to win in 33:43. Matthew Collins of Oswestry Olympians was second in 34:39 followed by his teammate Simon Barkley in 35:06.

An Olympian performance from 16-year old Bethan Jones saw her win the women’s race in 39:50. Helen Harrington of Vale Royal AC was second in 41:56 and Jessica Haney of South Cheshire Harriers third in 44:12.

Host club Oswestry Olympians had 9 finishers in the top 11 and 56 runners taking part on behalf of the Robert Jones and Agnes Hunt Orthopaedic Hospital Veterans Appeal. They had more than 100 volunteers aged 4 to 85.

Organiser Ray Pickett acknowledged everyone’s contribution saying: “There were many others who supported the event but thanks go to The Marches School for allowing us to use their facilities.”