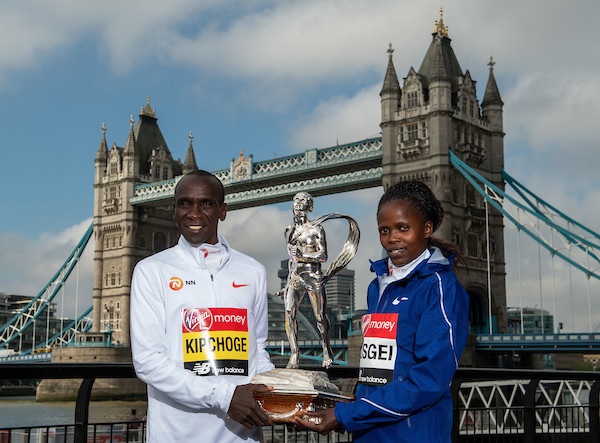 Yesterday morning (Sunday 25 April) another stellar field was due to battle for honours in the 40th Virgin Money London Marathon – scheduled to be the fifth race in the Abbott World Marathon Majors Series XIII. Instead of half a million spectators cheering on 45,000 runners the London streets were eerily quiet.

The world's fastest and second fastest were due to battle for honours in the capital. Eliud Kipchoge (Kenya) is defending London champion, course record holder (2:02:37) and world record holder (2:01:39). He was due to lock horns with Kenenisa Bekele (Ethiopia) who came so close to the world record with 2:01:41 in Berlin last year.

Instead of the current pantheon of elites plus thousands of club runners and charity fund raisers taking part in the world's greatest marathon, we were treated by the BBC to highlights of the first Gillette London Marathon in 1981, featuring the famous dead heat between Dick Beardsley (USA) and Inge Simonsen (Norway) in 2:11:48. Despite the rain that fell throughout, Joyce Smith (2:29:57) smashed the British record to win the women's race.

Among the British Olympic hopefuls who now have to refocus is 2:33:24 marathoner Doctor Eleanor Davis. The Preston Harrier works on Coronavirus wards at Stockport Hospital and she put matters into perspective after her plans were thwarted, saying: “All my plans went to pot. I'm normally part-time as a doctor so I can focus on my running but I have to tip the balance the other way. Whereas before I was a running doctor, now I'm a doctor who runs”.

The Abbott World Marathon Majors Series XIII has been adjusted to cater for various scenario. Tokyo Marathon went ahead as an elite only event on 1 March; Boston Marathon is postponed to 14 September; Berlin, due on 27 September, has been cancelled or postponed; London Marathon now takes place on 4 October and the series concludes at Chicago on 11 October.

Another unknown is the exact format of the postponed London Marathon. Will this be another elite only event, perhaps with limited crowd attendance? The proximity to the cancelled Berlin event makes changes to the format highly likely and many runners are taking the option to defer to 2021.

Meanwhile, enjoy our image below from different times. The six Barclays Runners from Poole had just completed the inaugural London Marathon in 1981. Photo was provided by Des White (second from left, Exmouth Harriers).