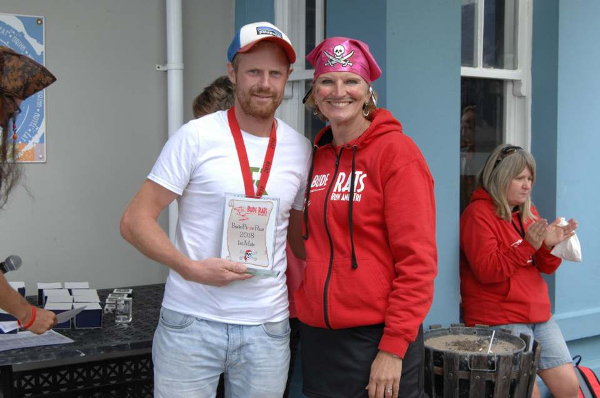 Tom Carthey made a successful assault at Sunday’s (9 September) Bude Pirate Run. He was part of a crew of over 200 runners who fought their way up hills and down coastal trails.

The Jolly Roger was flying proudly at the start as the field set off at 10.30am from Tommy Jacks Beach Hotel, Bude with blue skies and fair winds helping them on their way. They faced an 8.3 mile hilly course through woods and along the coast around the seaside resort in North Cornwall, an area with a past history of smuggling and piracy.

The rather appropriately named Amy Sole of Cornwall AC was the fastest female in 1:03:07 followed by Emma Baker of Launceston Road Runners in 1:04:50. Alex Kimmins came third in 1:07:09.

While there were no ‘pieces of eight’ as a reward, the generous prize list was more than ample compensation. There were prizes for the 1st, 2nd and 3rd male and female, age category winners and first affiliated running club male and female team (4 to finish). A medal, food and grog was awarded to every finisher.

This event is Race 2 in the Cornish Multi Terrain Series and organised by Bude Rats. Any runner on holiday in Bude is welcome to join them as a guest and experience these stunning trails for themselves.