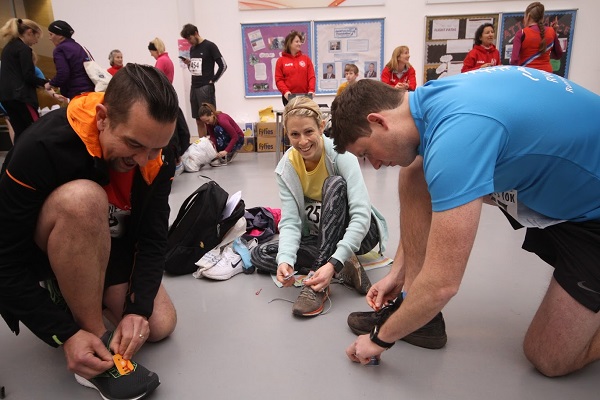 There was love in the air for the volunteers of 26.2 Road Runners Club, led by race director Bev Gow, who enabled the Valentine's 10K to proceed at Chessington on Sunday (16 February). Many hours had been spent checking the course to provide a safe event as Storm Dennis briefly abated.

Somewhat surprisingly, given the conditions, the number of finishers was just four less than last year (419) but more predictably the course record bonus of £100 survived for another year. Ed Prickett (Nottingham University, 30:17) from 2003 and Vicky Gill (Aldershot, 35:08) since 2009 remain the owners of the best marks on this normally PB-conducive route.

The puddles and wind may have slowed the pace somewhat but there were still some pretty impressive performances to admire. Daniel Cheeseman (City of York, 31:42) appears to have won his first ever 10K race on his debut at the distance. The track specialist ran 51:44 on his 10 mile debut at Twickenham in October and also ran 15:09 for 5K in Hyde Park last year.

The Valentine's 10K is promoted by Surbiton-based 26.2 RRC and sponsored by Up & Running Surbiton. Race HQ is Chessington Community College and the race started at 9:00am in Barwell Business Park. The fast and attractive course passed Epsom Polo Club and looped round Horton Country Park and Golf Club.

The Stragglers took the men's team prize and Epsom & Ewell Harriers were the top women's team. There is a wonderful collection of photos from Phil Kirk available here

Just to clarify the start was 9am not 9pm - it really was that dull on Sunday morning in Surrey!