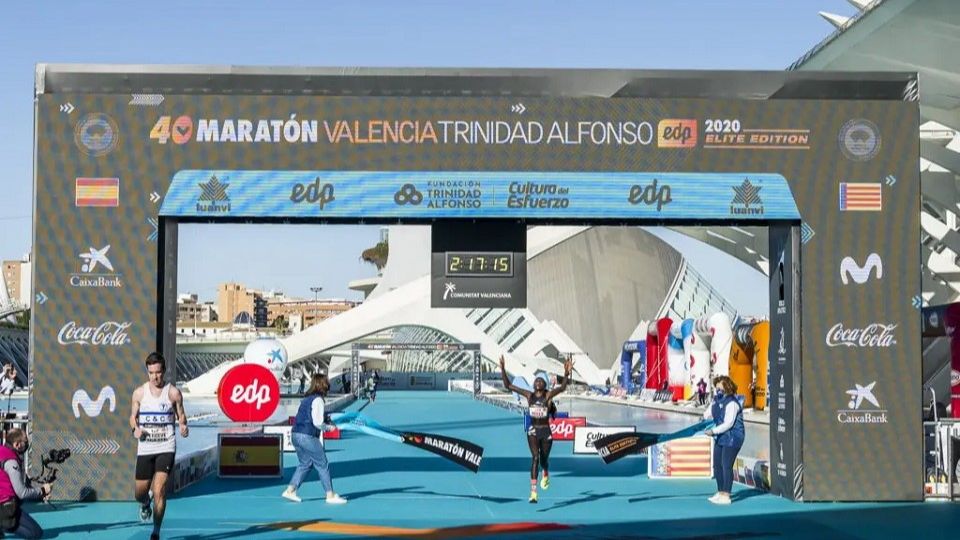 Valencia 'City of Running' serves up a feast of records

World half marathon record smashed; four men sub-2:04 in a marathon for the first time; all four course records broken in a bonkers end of year finale in Spain

It was more like the end of a track race than a marathon. After 42kms of close combat, there was nothing to choose between Kenyan athletes Lawrence Cherono and Evans Chebet in the Valencia Elite Edition Marathon today (Sunday 6 December) as they swung onto the azure blue finishing straight beside Museu de les Ciències Príncipe Felipe – the science museum.

The women's marathon witnessed a six-minute PB by world half-marathon champion Peres Jepchirchir (Kenya, 2:17:13) – also a Valencia course record in the 40th running of the race. This was a 2020 world-leading time and the fifth-fastest in history. Jepchirchir was unwittingly paced to the finish by Norman Shreeve (Cambridge & Coleridge, 2:17:11 PB) who can be seen finishing just ahead in our image above. The women’s podium was completed by Joyceline Jepkosgei (Kenya, 2:19:48) and W40 master Helalia Johannes (Namibia, 2:19:53).

In our Valencia preview last month we suggested the accompanying half marathon could be an even better quality race and so it proved. The first four men beat the world record of 58:01 set by Geoffrey Kamworor (Kenya) in Copenhagen in 2019. Good conditions, with sunshine and a gentle westerly breeze, helped the performances of Kibiwott Kandie (Kenya, 57:32), Jacob Kiplimo (Uganda, 57:37), Rhonex Kipruto (Kenya, 57:49) and Alexander Mutiso (Kenya, 57:59). The 5K splits of 13:37; 13:48; 13:45 and 13:32 tell the story of this incredible race.

With a race budget reported to exceed $6 million, the self-styled 'City of Running' lived up to its hype, and on a day of astonishing performances, it was fitting to hear Queen's Bohemian Rhapsody blasting out on the loudspeakers in the background, with apt lyrics that include: “Is this the real life? Is this just fantasy?”

You can relive the entire historic event via this link