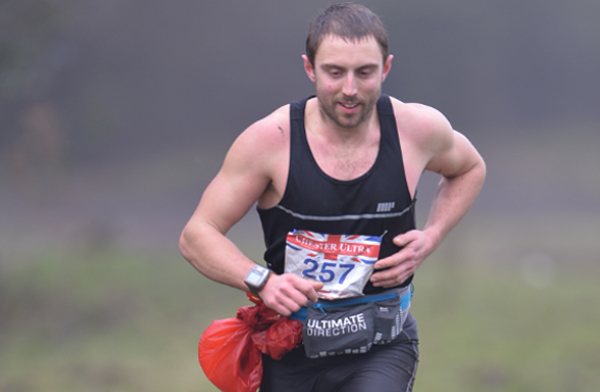 The owner of Running Riot Coaching winded himself after slipping on a stile; however, sore ribs didn’t stop him from crossing the line in 7:12, beating last year’s winning time by 18 minutes. An outstanding performance made even more dramatic by the fact he ran in a pair of road shoes!

The second new course record was posted by the winner of the women’s race Sally Ford who finished in 8:06. Sally was the first lady in 8:27 at the inaugural 2017 Chester Ultra but knocked 21 minutes off her time with a powerful display of running.


'Not to yield' was the mantra for everyone who took part, head torches switched on as they set off at 6am from Waverton Village Hall on a very well marked and signed course. The route went through Chester passing the racecourse before heading out towards Frodsham and Helsby hill then Delamere Forest followed by a final, six mile stretch along the canal.

Thick, clay-like or liquid mud slowed people’s progress to a walk and there were several falls. But many runners continued despite being at the edge of their physical and mental limits. Race organiser Wayne Drinkwater added an extra hour to the cut off time, increasing it to 16 hours then further extended it to over 18 hours, allowing this correspondent, her running partner and five others to finish. This generous act was appreciated by those last few stalwarts at the end of a long yet successful day for all.