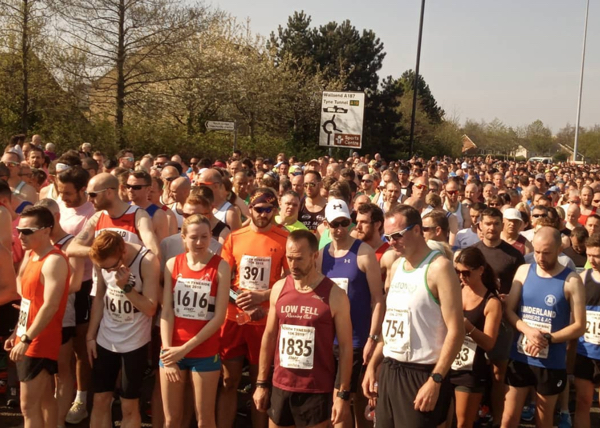 Tyneside runners tough it out in Easter sunshine

Easter Sunday’s (21 April) North Tyneside 10K brought with it one of the sunniest events the race has even seen, with the weather representing an additional challenge on the scenic course.

Popular as ever, organisers were in the fortunate position of posting the sold-out signs from Christmas, and on the evidence of some of the images from Sunday’s proceedings, it really isn’t hard to see why.

The race saw runners start at the Parks Sports Centre in North Shields before taking in the Fish Quay, Tynemouth Priory & Castle and a long stretch of coastline before finishing at St Mary’s Lighthouse in Whitley Bay.

While the weather may have meant that Serod Batocir’s 2011 course record of 30:26 was never in jeopardy, there were some strong performances from the 1800 plus field. North Shields Poly’s David Green claimed top spot in 32:36, followed by Gateshead Harriers’ Daniel Alexander (32:59), with Blaydon Harriers’ George Rudman in third (33:43).

Phil Scott, head of environment, housing and leisure at North Tyneside Council commented: “The race was an early sell out and there was a real buzz in the days leading up to it. I’d like to congratulate the winners and everyone that took part whatever their finish time and personal goals.”