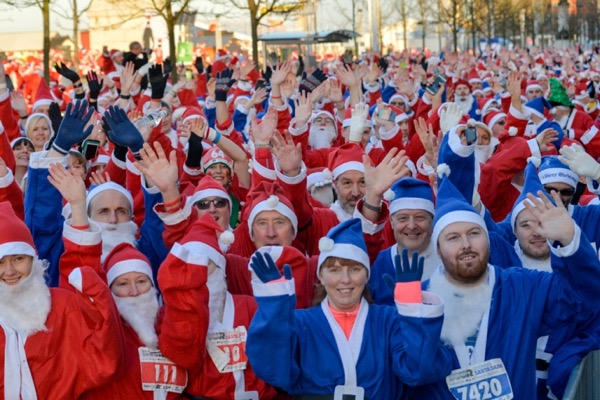 There’s just under a week left to secure your place at the UK’s largest festive run, the BTR Liverpool Santa Dash. If you are unable to make it to Merseyside this Sunday (2 December) but are keen to get into the festive spirit, organisers have extended entries to allow interested runners to take part virtually.

In what will be the 15th annual staging of the event, up to 10,000 runners will transform Merseyside into a sea of red and blue Santas. Sunday’s field will embark on a new route that begins at Pier Head, part of the city’s iconic UNESCO World Heritage.

The route will then take Santas through Royal Albert Dock Liverpool and the city centre, before crossing the finish line outside Liverpool Town Hall on Dale Street where they will be greeted by festive characters and ‘real’ snow.

For the upcoming event, BTR Liverpool recently confirmed the Santa Dash would be an official event partner for Channel 5’s high profile Help The Animals at Christmas initiative, which showcases the work done by the RSPCA, Scottish SPCA, Blue Cross, The Donkey Sanctuary and Wildlife Aid Foundation.

As such, Santas taking part in Sunday’s run are invited to support the campaign and the five animal and welfare charities by raising cash while they dash. Further information, including those who are looking to take part in a virtual Santa Dash, is available here.