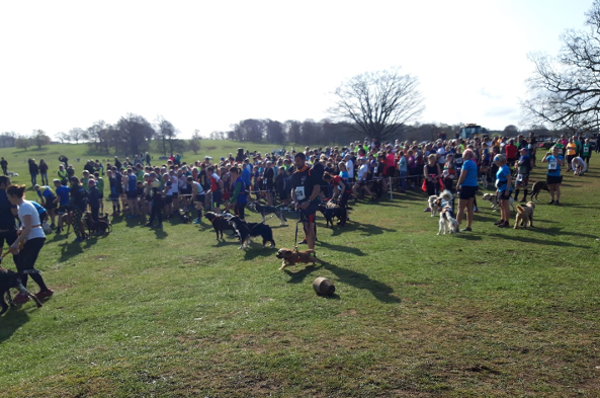 It was thirsty work at Sunday’s (31 March) hilly Grantham Cup 10K Trail and Canicross Race. The climb up to Bellmount Tower took its toll the second time around...

This 10K race was held in the ground of Belton House in Grantham, Lincolnshire that was also the location for the International Horse Trials event. Organised by Grantham RC in conjunction with BEDE Events, it has become increasingly popular with canicross runners who featured strongly throughout.

They started at 10am on a beautiful sunny day and faced a tough, cross country course consisting of rough grass and wooded tracks. It went through parkland and woods and included two ascents up to the 18th century folly, Bellmount Tower followed by quick descents and on to the finish in the National Trust grounds.

William Tucker of Grantham AC galloped over the finish line to win in 36:46 followed by Aaron Harris of RAF Cranwell in 38:13. Paul Massingham of Stamford Striders was third in 40:50.

Emma Johnston of Helm Hill Runners was in winning form to become the first female in 44:53. Eva Wilkes of Norwich RR was second in 46:34 with Joceline Smith of Grantham RC third in 47:27.

Christopher Taggart and his four legged companion were the first Canicross finishers in 42:20. There were 339 finishers in total.

There were rosettes for the 1st, 2nd and 3rd male and female, age category winners and the top canicross. All finishers were presented with a bespoke medal, bottle of trail ale courtesy of Oldershaws Beers and entry into the International Horse Trials event.