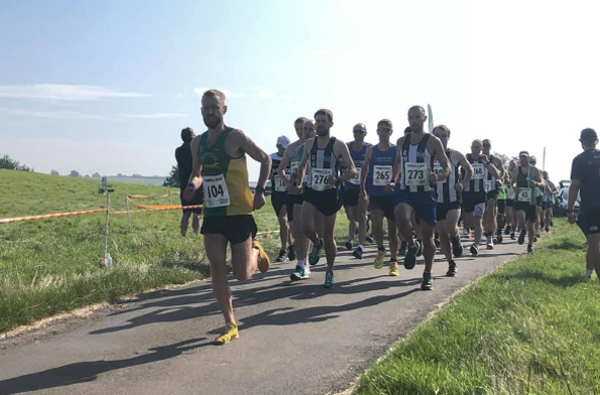 Tom Whitmore rose above the heat and hills to win the new Launde 6 on Sunday (25 August). This victory boosts his claim for the top spot in the summer Leicestershire Road Running League (LRRL).

The Launde 6 was the penultimate race in the LRRL Open Summer League and things got underway on Sunday 23 June at the first race in the series, Prestwold 10K in which Tom Whitmore took third place. He was fifth at the Joy Cann 5 on Wednesday 31 July, third at the Carl Rutt 10K on Sunday 11 August and now first at Sunday’s Launde 6.

Launde Village was the location for this 6 mile race held on closed roads and hosted by Wreake & Soar Valley RC. Home to a 12th century abbey and stunning views of the countryside around East Leicestershire it posed a challenge to those taking part on account of both the elevation and the weather.

With an earlier than usual start time of 10am, over 400 runners took on six undulating (or hilly) miles in very warm conditions. The drinks station at 3 miles was a welcome sight as was a group of residents who provided buckets of sponges for cooling off.

Whitmore of Charnwood AC was first across the line in 34:02. Ludovic Renou of Leicester Coritanian AC was second in 34:15 and Luke Ingram of Owls AC third in 35:13.

Charlie Nurse of Wigston Phoenix RC was the first female in 39:09 followed by Jessica Necchi of Race Hub in 42:14. Lucy Ellis of West End Runners was third in 42:36.

The final race in the series is the John Fraser 10 on Sunday 8 September.