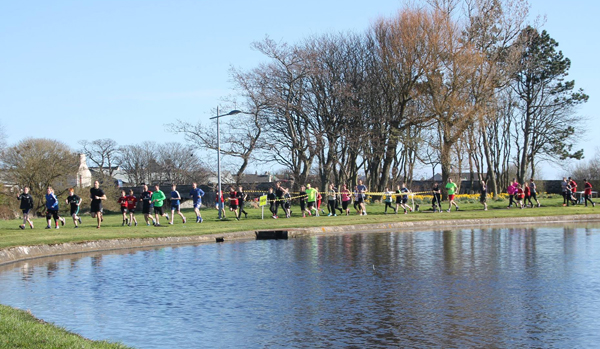 No Northern Exposure At Sunny Thurso

April saw a near 10% increase in the number of Scottish parkruns. Fort William started the run rush on 7 April while Kirkwall (Orkney) added to the small number of island parkruns worldwide on 21 April. In between Thurso became the most northerly event on the British mainland on 14 April when an enthusiastic band assembled - including a diminishing number of visiting regionnaires* - at the boating pond.

A field of 76, two-thirds of them parkrun first-timers, were sent on their way by event director Donna Stewart. Fair weather meant that the riverside sections were dry and the field enjoyed an interesting route with a lap around the pond, riverside paths and bridge crossings.

Vet Kevin Cormack and Rhiannon Kirk set the course records at 17:41 and 19:43 respectively. Kevin returned the following week to knock a few seconds off that time when the turnout (96) was boosted by a visiting party of Caithness United runners.

Event director Donna anticipated that numbers would fall off for Week 3 but she got it wrong and a third record field of 97 turned up last Saturday. Another big contingent of first-timers were joined by prolific parkrun tourists Scott McMichael and Rebecca Baillie. Rebecca marked her trip to Thurso by finishing first female runner in 26:16.

It was another dry day on Week 3 (Week 2 had also been bright) with lots of walkers and kids, and organisers were delighted that parkrun's inclusive ethos has really caught on in the area. They're also pleased that their event is attracting lots of interest from parkrun tourists and promise a big Caithness welcome to all visitors and a generous refuelling option at the Café Tempest.

Blogger Davie Black made a round-trip of 500 plus miles to add Thurso to his parkrun CV and reports on his adventures here.

Details of the Thurso event at the parkrun website.