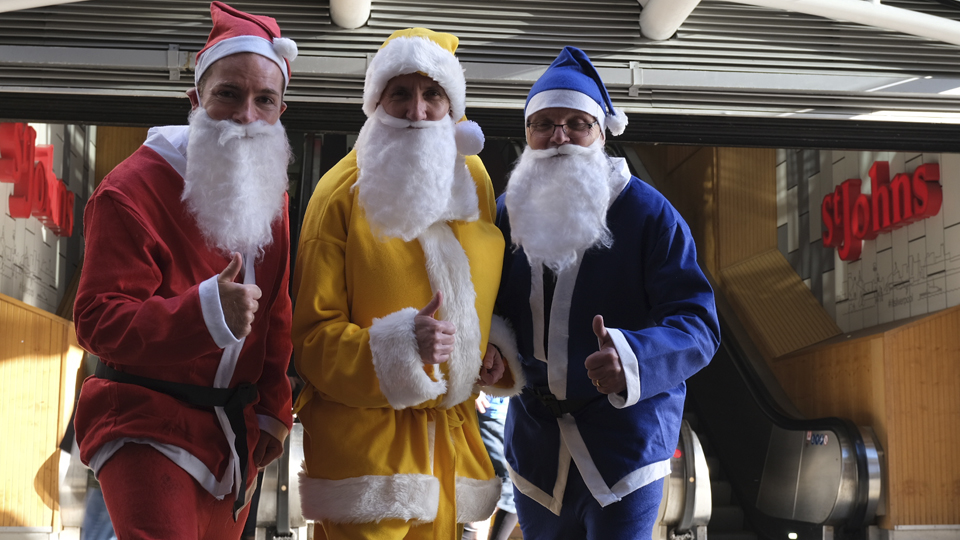 A New Santa In Liverpool Town

The countdown is on for Liverpool's favourite festive dash...

Liverpool will see the return of the world-famous Santa Dash in less than three weeks (5 December) and over 3,000 excited Santas have already registered! The pop-up shop is now open for registration and there’s even a new Santa in town.

Anticipation and excitement are steadily mounting for the event return after it was staged virtually last year due to COVID. Participants are now counting down the days until they can once again transform the city into a sea of dashing Santas.

The Santa Dash pop-up shop is now open seven days a week until Saturday 4 December at St Johns Shopping Centre, located on the upper level near the Matalan bridge. The shop is open for in-person registration, as well as Santa suit collection for anyone who has registered online.

Neil Ashcroft, Manager of St Johns Shopping Centre, commented: “You definitely know Christmas is on the way when the Santa Dash pop-up shop opens, it’s the real start to all things festive in the city. It’s fantastic to welcome the Santa Dash team back to St Johns Shopping Centre for the fifth year of festive fun. I’ll be taking part once again with a team from St Johns and we cannot wait – see you on the start line.”

Speculation remains rife in the city that Neil and his team began training for the event as far back as September and have been upping the intensity of their training as race day approaches. runABC North's undercover team filmed the following high intensity training session from what is thought to be Neil's team of Santas:

Liverpool-based gifting company, Appreciate Group, is this year’s headline partner – and are introducing a bright new Santa to the colourful event. Andy Hammerton, Head of Corporate Affairs at Appreciate Group, explained: “There’s nothing quite like the iconic Liverpool Santa Dash and the sight of thousands of blue and red Santas streaming through the city. This year will see a new Santa in town – in the shade of Appreciate Group yellow. It promises to be a joyful event.”

Dashing Santas are being encouraged to walk, jog or run to raise funds for Alder Hey Children’s Charity – the event’s official charity partner for 2021. The event is accessible and open to everyone – wheelchair participants, walkers, joggers, runners, families, friends, colleagues, tiny Santas in prams, and even four-legged furry Santas.