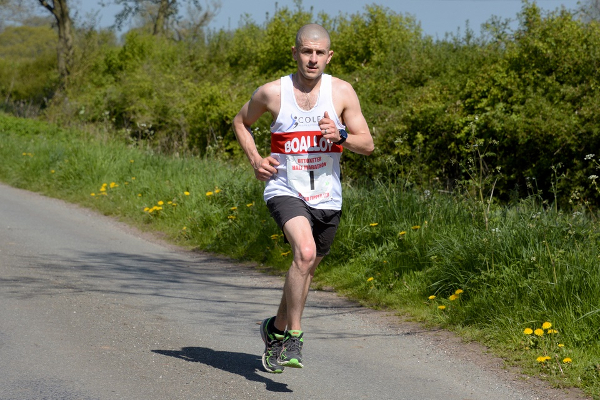 Moulton Burns Up The Road At Uttoxeter

A blistering turn of speed from Carl Moulton saw him take the top spot at Sunday’s (6 May) Uttoxeter Half Marathon. The heat was on for him and nearly 300 runners...

Moulton of Boalloy Running Club was in commanding form throughout and was first across the line in 1:14:21 with over four minutes between him and the runner-up. Ben Evans of Tamworth AC was second in 1:18:34 followed by Richard Walsh of Worcester AC in 1:19:52.

Joanne Bentley of Stone Master Marathoners won the women’s race in 1:33:45, finishing over three minutes ahead of Michelle Buckle of Newcastle AC who was second in 1:36:48. Jenny Laing of South Derbyshire Road Runners was third in 1:38:38.

The half marathon was part of the Uttoxeter Festival of Running along with a 10K and a junior race, all of which took place in tough conditions. This annual event is organised by Uttoxeter Road Runners and set in a scenic location including a few climbs to deal with although the views made up for the elevation.

This is a challenging race on a normal day but the Bank Holiday heatwave added another layer of complexity as runners battled the heat and the hills. For anyone aiming for a PB that was put on hold for another day while others chatted and shared water with each other as they completed the 13.1 miles.

There were technical T-shirts for the finishers who celebrated and/or re-hydrated at the Racecourse.