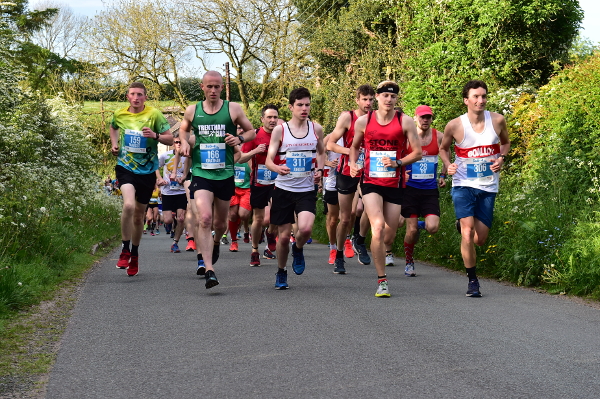 The local running community put its best foot forward at Wednesday’s (15 May) sold-out Stone 5 to support Mick Hall and Lymphoma Action. And they had a few inclines to deal with...

Now in its third year, the Stone 5 has been included in the North Staffs Road Runners Association (NSRRA) programme of races – number 7 in the list – and attracted a good many of its members battling for points and standings.

Representatives from Trentham, Newcastle (Staffs) AC, Stone, Stoke FIT, Stafford, Boalloy and other clubs met at Oulton Cricket Club on a warm, sunny evening for a midweek blast around a two-lap course. A free buffet including cake was waiting for them but there was the not-so-small matter of a few hills before they could recover with food and a drink or two from the bar.

A “3...2...1...Go” from Ken Rushton saw runners speed away from the start and downhill before encountering the first of the hills. This theme was repeated throughout the race. Marshals and spectators cheered the field as they completed the first lap and again as they headed into the grounds of the Cricket Club and towards the finish line.

Daniel Soltys of Stone MM, building on his recent second at Uttoxeter Half Marathon, shot across the finish line to win the 2019 Stone 5 in 29:57. Neil Tapp of Boalloy RC was second in 30:39 and Simon Hodgkinson of Stone MM third in 30:57.

Kelly Butler, the winner of Stafford Half Marathon in March, continued to impress, winning the women’s race in 33:40 followed by Emma Taylor of Congleton Harriers in 34:58. Nia Rose Nokes of Stone MM was third in 35:46.

There was a medal and a free buffet for everyone in the Cricket Club pavilion although the buffet was gone by the time our correspondent arrived however a 'rather nice' chocolate cupcake had been saved for her and that went down a treat.

Proceeds from the race and raffle donated to Lymphoma Action.