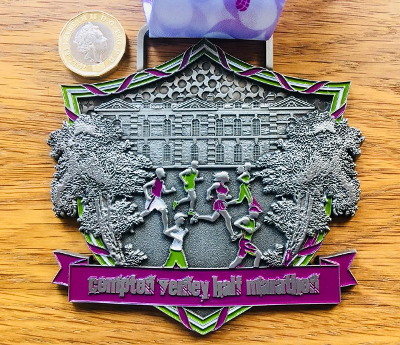 Hosepipes were out in force on Sunday (1 July) at a very hot Compton Verney Half Marathon in Warwickshire. This was good timing as a hosepipe ban is likely due to the heatwave.

Local residents and spectators used hosepipes and water pistols to spray runners as they passed and this along with the extra water stations and sponges were a welcome relief in the heat. There were lots of soaked and happy faces when they crossed the line.

The organisers, Tempo Events advised runners about the extreme conditions in the final race information on their website. Recommendations included wearing light coloured clothing, being sufficiently hydrated before the race and slowing down or stopping if feeling unwell. The water and energy drinks kept everyone going to the end despite the hot weather. And the hill at mile 11!

Formerly known as the Edgehill Half Marathon the race was renamed after this 18th century country mansion and its scenic parkland, only nine miles from Stratford-upon-Avon where at 9.30am, nearly 200 runners headed off in front of the house, following an undulating route through Kineton, Little Kineton and Radway before a climb up Pittern Hill then a downhill sprint to the finish by the lake.

There was a generous prize list with a distinctive medal for every finisher and the chance to refuel at the Compton Verney cafe.

While the heatwave is set to continue for another two weeks there is a solution...entries have opened for the Tempo Winter Series 2018/2019. Visit the website for more details.