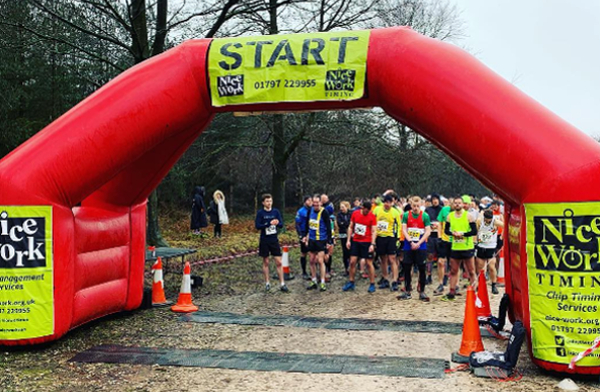 The first Cannock Chase 10 and 5 Mile (Sunday 10 February) got off to a winning start and there were lots of smiles as runners tackled hills, mud and miles...

A new addition to the Nice Work family, the Cannock Chase 10 & 5 mile had something for every runner irrespective of age, ability or experience. There was a choice of two distances, prize list, a bespoke medal and goodies and, not forgetting, the superb surroundings of Cannock Chase, perfect for trail running.

Wet and windy conditions formed a backdrop to this sold out event that saw 350 people entered in the 10 mile and 150 in the 5 mile. Runners followed an ‘undulating’ single or two lap course on trails and forest paths around this Area of Outstanding Natural Beauty (AONB) in Staffordshire.

Taking part was Karen Clayton who has embarked on a series of challenges in her 50th birthday year to raise funds for Marie Curie UK. Titled ‘Karen’s 50 in 50’ she has a list of 10ks, half marathons and triathlons to complete which also included the Cannock Chase 10, the fourth challenge on her list.

Nice Work will be returning to Cannock Chase on the 25 May as part of the Forestry 100 series of 10K trail runs. Check runABC Midlands recent story on this series here.