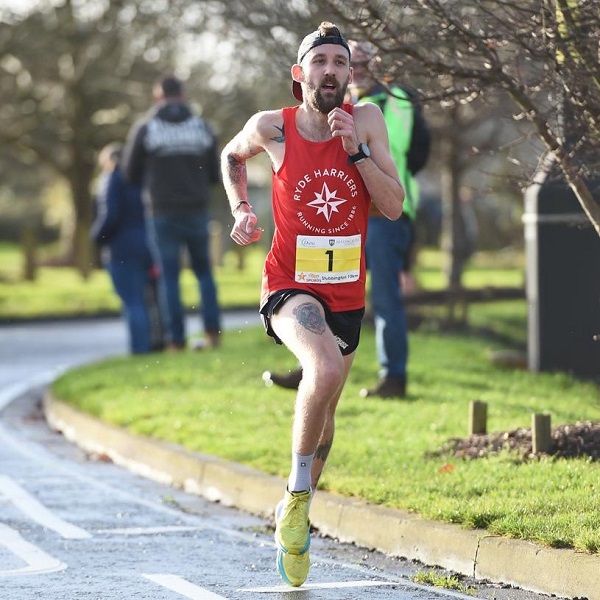 Joe Wade (pictured above wearing race #1) made the short journey from the Isle of Wight to take the 35th annual Stubbington Green 10K from a record field of 1,753 finishers on Sunday (12 January). Meanwhile, there was a new name but the same athlete winning the women's race as Jen Granger (formerly Elkins) completed her third consecutive victory.

Stubbington Green 10K, established 1985, lived up to its reputation for fast times and close racing as Ryde Harrier Wade (30:55) dipped under 31 minutes and 160 athletes beat 40 minutes.

Jen Granger (Southampton, 34:56) had an even bigger battle with former world and European cross country representative Louise Damen (Winchester, 35:04) who was only four seconds behind at the finish on gun times. W40 Lesley Locks (Aldershot, 36:17), Cassie Thorp (Portsmouth, 36:30) and Sarah Kingston (Southampton, 36:49) completed a top quality quintet at the head of proceedings in the women's race.

Mild weather helped nearly 1,000 runners to sub-55 minute times and all 1,753 finished inside 1:45:00. The attractive route takes runners north of the Hampshire coastal village on Titchfield Road onto Coach Hill before heading south to loop round Meon Shore, Titchfield Haven Nature Reserve and Cliff Road – with glorious views across the Solent to the Isle of Wight – and back into Stubbington centre for the finish.

The 'Stubbies' pride themselves on their altruism and this year the two charities that will benefit from their fundraising efforts are Rowans Hospice and Haven Breast Cancer Charity. Last year £8,000 was divided equally between Abby's Heroes and Solent Diabetes Association.

Stubbington Green 10K is a guaranteeed sell out every year so if you don't want to miss the boat in 2021, race director and Stubbington Green Runners' chairman Kevin Ashman has advised: "Pencil in Sunday, 10 January 2021".

Full details will be confirmed soon and published in runABC South race listing.