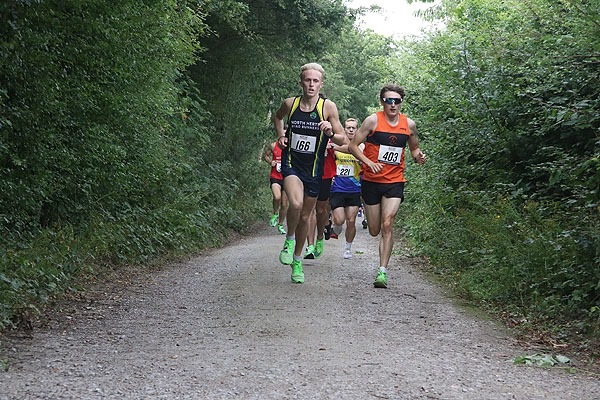 The leaders were going like a train at St Albans 10K on Sunday (4 August). Perhaps it was the disused railway line that formed part of the course but the top three certainly arrived on time, with just 20 seconds between them!

It was all aboard the St Albans 10K Express as 500 runners steamed away from Highfield Park to negotiate the flat, tree-lined former railway line, now happily in use as the 7.5 mile long Alban Way cycle path on the old route between Hatfield and St Albans.

Our picture shows #403 Jamie Philpott and #166 James Fox prominent in the early stages and it was Philpott (Herts Phoenix, 34:11 PB) who prevailed over Fox (North Herts RR, 34:22 PB) at the end of the line. There must be something about the forenames, too, as Jamie Sinclair (St Albans Striders, 34:31) was third!

Tight finishes continued in the supporting Family Mile. Although there were only 22 runners this was the race of the day as Thomas Bracey and Catherine Thurgood (7:26) could not be split by the timekeepers, with Thomas gettin the nod from the finish line judge. Jonathan Wilding (7:30) was not far away in third after a terrific sprint finish.

The single-lap course runs out towards Hatfield before making a loop via Sleapshyde and returning along Alban Way. The whole route is on tarmac and a lot of the course is traffic-free.

Race organisation was by Active Training World and the official charity was Guide Dogs who brought a few of their irresistible and perfectly trained ambassadors along to the event.