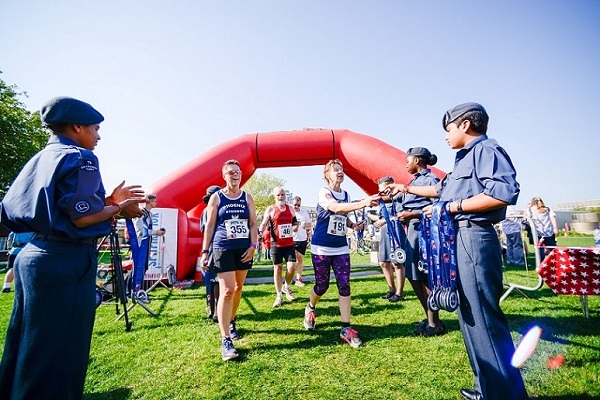 There were 674 who earned their wings, or at least medals, at the Spitfire 10K in London on Saturday (31 August). This was the second Nice Work's race at the historic former London Aerodrome in Colindale, helping the RAF Museum to celebrate the 'Summer of Spitfire'.

'Summer of Spitfire' is part of the museum's tribute to the first 100 years of the Royal Air Force and helps to commemorate the heroic exploits of the pilots in the Battle of Britain in 1940 – nearly 80 years ago.

Good flying conditions helped runners to launch an attack on personal bests and the inaugural course records of 36:36 (men) and 41:21 (women) but despite some heavy flak both survived.

There were just over 275 safely home inside the hour and the tail returned in 1:52:24 with mission accomplished!

Many runners embraced the occasion by dressing in the appropriate flying gear of the era. The two lap course included the 'taxiway' and passed the museum's Spitfire Gate Guardian. Back in the grounds of the museum there was an exciting run through Hanger 1 and beneath the wings of the famous Short Sunderland flying boat.

In a quite literally moving tribute, all runners wore the name of a Battle of Britain pilot with their race number, to help remember the brave RAF pilots who served in the Battle of Britain.