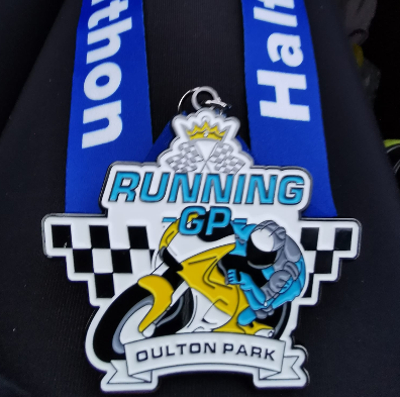 Runners turn on the speed at Oulton Park

A superbike-themed medal was the prize for finishers at the Running Grand Prix Oulton Park (Sunday 1 December) after they raced around this much-loved circuit. From a single to several laps they were determined to keep going and The Stig lent his support.

This Cheshire motor racing track is used to the sights and sounds of touring cars and motorbikes speeding around its circuit but on Sunday it echoed to the sound of pounding feet. This is one of three events in the Running Grand Prix Series along with Goodwood Motor Circuit and Bedford Autodrome, organised by RunThrough.

There were six distances to choose from: 5K (1 lap), 10K (2 laps), Half Marathon (5 laps), 16 Mile (6 laps), 20 Mile (7 laps) and a Marathon (10 laps). Temperatures had dropped to below zero the night before resulting in frost on the circuit although this started to clear once the sun came out.

People came from across the country to experience a smooth, traffic-free, tarmac circuit. Appearances can be deceptive as regards the Oulton Park circuit which consisted of tight corners, rolling climbs and descents – instead of a flat course as first assumed. Running Bear conducted a warm up before the start, helpers encouraged runners all the way around to the finish and The Stig ‘high fived’ them as they crossed the line.

The next race in the series is Running Grand Prix Goodwood Motor Circuit on Sunday 8 December.