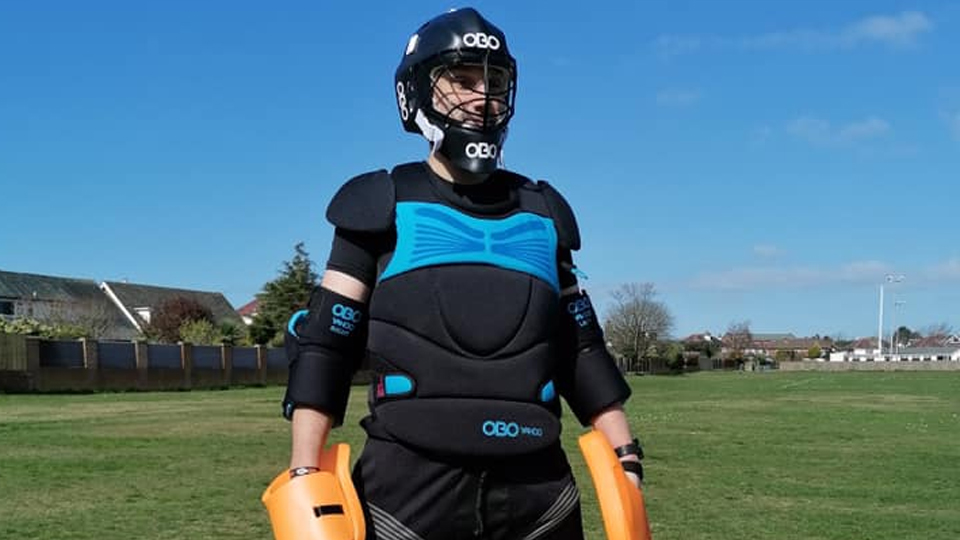 A runner from Southport will attempt to break a Guinness World Record at the upcoming BTR Liverpool Skyline Half Marathon – and he is appealing for a helping hand on the day.

45-year-old Paul Warrington from Birkdale will be running the 13.1-mile race on Sunday 12 September dressed in full hockey goalkeeper kit (weighing 12lb). He must beat a time of two hours 45 minutes to break the current record.

Paul, who is a member of Southport & Waterloo AC, must be accompanied throughout the race to ensure he meets the challenge criteria. The race day companion will need to photograph him passing every mile marker and confirm he completed the race in full kit.

The challenge started as a joke with his hockey playing daughter. But after scouring the record books during lockdown, Paul found his challenge. He has been training in full kit including at his local parkrun at Hesketh Park.

Paul is using the record attempt as his motivation to fundraise for Cancer Research UK. His father-in-law was diagnosed with lymphoma in Summer 2020, and after six months of chemotherapy is now in recovery. Paul has already raised £600, his donation page can be found here.

Paul commented: “This all started as banter with my daughter but it’s very real now. I’ve been training in full kit and the race is fast approaching – it’s going to be tough. I’ve ran the London Marathon four times, but this is most definitely going to be my biggest challenge yet.

“I would be grateful to anyone running a similar pace who is able to join me on the day and verify my attempt. People fundraise for so many important causes so I just wanted to do something a bit different as our family’s way of saying thank you for the care my father-in-law is receiving.

“Running in hockey goalkeeper kit, attempting a record, and fundraising – that will keep me going when it gets tough. The whole experience is going to be very memorable.”

BTR Race Director Alan Rothwell commented: “Paul is a great example of taking a difficult situation and turning it into something positive. The running community is very supportive so please come forward if you can help. Good luck Paul and smash that record, we’re all right behind you.”

Entries are still open for the 28th annual BTR Liverpool Skyline Half Marathon, which also includes a 10-mile race. The event boasts a grandstand start and finish area at Pier Head Liverpool.

If you are taking part in the BTR Liverpool Skyline Half Marathon and can help Paul on race day, please email Erica.