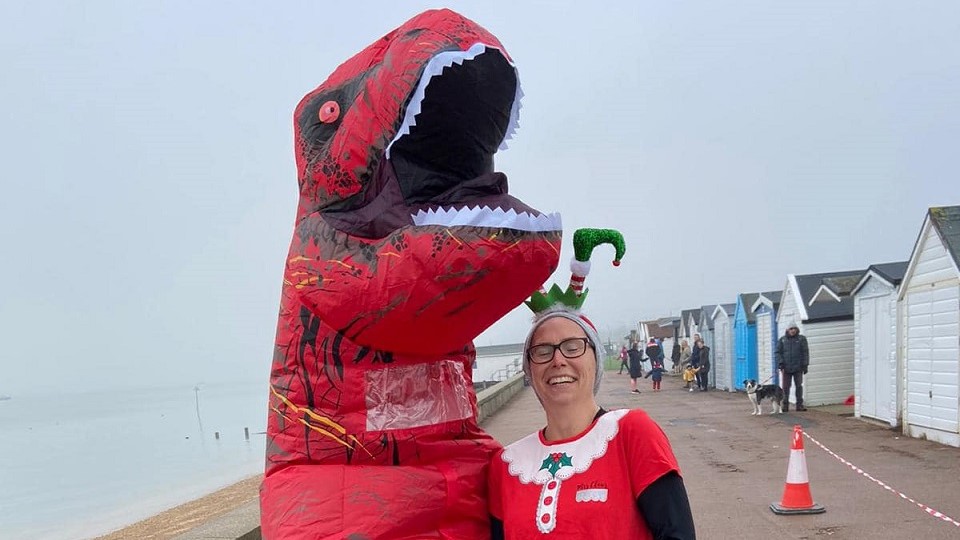 There were 430 humans and one dinosaur finisher at the 10th Rudolph Run on a rather misty Sunday morning (19 December) on Southend-on-Sea esplanade. 'Doyouthinkhesawus' was dressed to impress, along with his handler and the majority of competitors who entered into the festive spirit of this fun event by Nice Work race management.

There was a winning double for Leigh-on-Sea Striders members, who probably had one of the shortest journeys to the start adjacent to Ness Road on the Esplanade. Gus Withers (24:55) and Victoria Wadley-Smith (32:15) made quick work of the fast, flat course on the stretch of seafront known simply as The Prom.

The women's podium was completed by Rhian Shrimplin (Ashford & District, 33:06) and Laura Wise (unaffiliated, 33:36) and the most impressive master's run was 39:10 by W65 Pamela Wilson, of Ware Joggers.

The race was supported by Action Medical Research previously The National Fund for Research into Crippling Diseases and a donation was made in recognition of their valuable assistance in providing marshals.

All finishers received a medal, festive goodies, and mince pies. The main event was preceded by the Rudolph Scurry for children of all ages.

Nice Work will conclude their 2021 offer with the Gravesend Floodlit 10K and 5K Series Final this Thursday (23 December) and the Saltwood Boxing Day Run (26 December) near Hythe.

Results can be studied via runABC South race listing