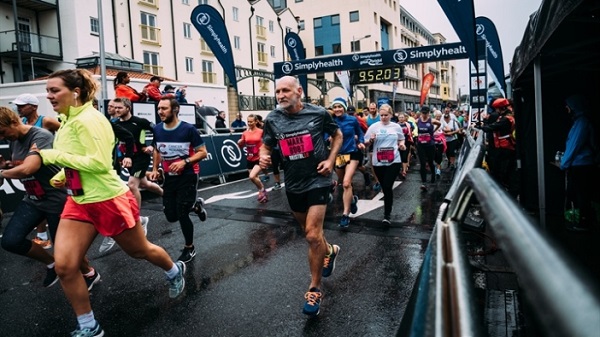 Runners and supporters battle Bronagh at Bristol Half Marathon

Around 10,000 runners battled Storm Bronagh to complete the Simplyhealth Great Bristol Half Marathon yesterday (23 September). Despite the appalling conditions the official results were showered with personal bests as Cardiff AAC athletes Matt Clowes and Clara Evans led the way.

The strong wind and heavy rain did not deter thousands of hardy spectators from turning out to cheer the runners on their way in the third edition of Simplyhealth Great Bristol Half Marathon, part of the Great Run Series.

Matt Clowes was first back for some dry clothes, taking just 1:05:10 for the spectacular course from Anchor Road, along Portway, under Clifton Suspension Bridge with wonderful views of Avon Gorge before returning for the city centre finish.

The immediate runners-up were Tom Merson (Exmouth Harriers, 1:09:34) and Matthew Rees (Swansea Harriers, 1:09:51 PB) who was the much lauded runner who famously assisted a struggling fellow athlete over the line at the 2017 Virgin Money London Marathon.

Club athletes were joined by thousands of fundraisers, including the 100-strong team from Empire Fighting Chance, a local charity that works with young men and women in Easton and St Paul. Anna Ross from Empire Fighting Chance said: “We’ve focussed on a 100-day challenge for the Simplyhealth Great Bristol Half Marathon. Asking 100 people to raise £100 by running the event and in return we offered a 100-day training programme and support. Collectively we have raised more than £10,000. This fundraising will make a huge difference to the impact of our work and increase the number of young people we can support across Bristol.”

Simplyhealth's Helen Dickinson said: “Well done to everyone who took part in the Simplyhealth Great Bristol Half Marathon today. Whether you ran, jogged or walked, just taking part is a huge achievement in itself. At Simplyhealth we’ve been supporting runners every step of the way, including our massage and stretch zones on site today”.

The Great Run Company's Andy Graffin added: "It has been a fantastic day at the Simplyhealth Great Bristol Half Marathon. Huge congratulations to everyone that took part today, despite the challenging conditions.”

Entries for 2019 are now open, with a £5 discount available for the first 500 entrants. Visit the Great Run website here for more information or to enter now.