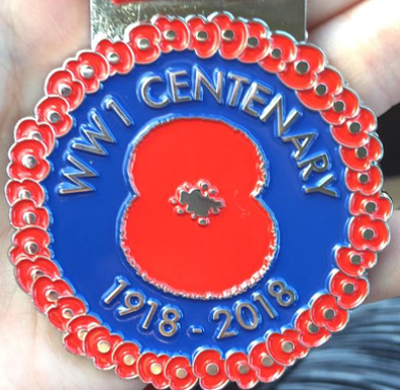 It was mission accomplished at Sunday’s (28 October) sold out Brigg 10K Poppy Race and Military Challenge where everyone did their bit for the Poppy Appeal whether running, walking or tabbing.

For organisers Curly’s Athletes it was a race against time to deliver this event. They were approached by Frances Ward, Brigg District Poppy Appeal Organiser about getting involved with the 10K and at very short notice but they proved to be more than equal to the task. They are a community-minded event management team with extensive experience in organising running and cycling events and an all-inclusive ethos.

The event was held on an out and back course along rural roads in the market town of Brigg, North Lincolnshire to fundraise for the Royal British Legion Poppy Appeal. The event consisted of a 10K and a Military Challenge which entrants undertook wearing boots and a Bergen weighing 36lbs for men and 24lbs for women.

At 9.30am two pipers led out the entrants in the Military Challenge who could run or ‘tab’ (fast walk) around the course. They were followed by the 10K runners at 9.45am.

In the 10K, one lady showed grit and determination despite sustaining an injury to her upper arm. Rosemary Moore (F70) fractured her humerus in two places but her ‘onwards and upwards’ attitude saw her walk the last 3K accompanied by a paramedic and across the finish line in 1:37:14.

She and the other finishers received a bespoke poppy medal and cake.