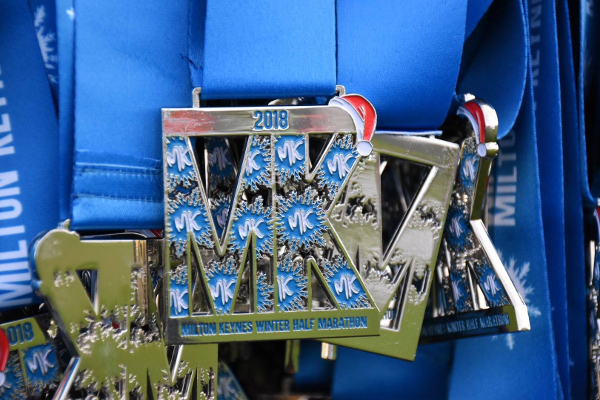 Around 2,000 runners appeared on the silver screen at the Milton Keynes Winter Half Marathon (Sunday 9 December) to enjoy a big moment at the ‘best last race of the year’.

Organisers FQ Events set up a giant screen showing race footage, live results and the prize presentation, ensuring everyone had their 15 minutes of fame. This was one of several highlights at the sold-out Milton Keynes Winter Half Marathon held in near perfect conditions – a complete contrast to the 2017 race that was postponed due to snow!

There wasn’t a single snowflake on Sunday; instead the weather was dry with sunny intervals as 2,000 entrants headed off at 10am from Willen Lake. They followed a single lap, traffic free course in an anti-clockwise direction around Milton Keynes before finishing back at Willen Lake.

Ryan Burling’s average training pace of 5.30 paid dividends as the Guernsey AC runner won in 1:08:17. George Wheeler of Marshall Milton Keynes AC was second in 1:08:53 with his teammate Samuel Winters third in 1:11:16.

British and Irish masters cross country champion (W45) Kate Rennie added another win to her tally. Rennie of Dacorum & Tring AC was the fastest female in 1:23:14 followed by Johanna Sharples of Leighton Buzzard AC in 1:24:30. Rebecca Winter of Ackworth RR was third in 1:27:10.

There was a sparkling medal for every finisher along with a long sleeved t-shirt. Post-race refuelling took place with Christmas treats courtesy of Apple Blossom Cakery and drinks at the licensed bar.