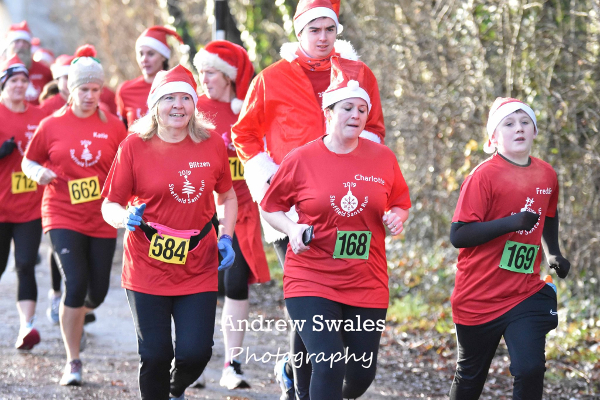 A snow machine created a winter wonderland and there was plenty of good cheer at Saturday’s (21 December) Sheffield Santa Fun Run & Walk. The Steel City Santas were well -ewarded for their seasonal efforts.

Such is its popularity - grown since its launch in 2017 - that 600 runners signed up for this Christmas-themed event making it the biggest turnout to date. Organised by Run For It, a family-owned company with 50% of profits going to nominated charities. This year’s designated charities were the Alzheimer’s Society, Bluebell Wood Children’s Hospice and the Cathedral Archer Project.

Santas of all ages ran or walked 5K or 10K and the two start times meant it was possible to ‘do the Santa double’: run the 10K at 11am followed by the 5K at 2pm. Amongst those taking part were two groups – one supported by a charity which helps disadvantaged girls and women and the other by a charity working against human trafficking.

The runners had been given a free personalised T-shirt and hat and these were on display as they made the most of a scenic route along the canal towpath also suitable for dogs, wheelchairs and buggies. Waiting for them at the finish was a medal, mince pie and a glass of Bucks Fizz with a Santa’s Grotto for the children.

This inclusivity is an integral part of Run For It, allied to altruistic values that are particularly relevant at this time of year. As Race Director Mel Wilkinson says: “Christmas is a time for giving and we like to help as much as possible those in need whilst at the same time provide a great deal of family-friendly fun to local people.”