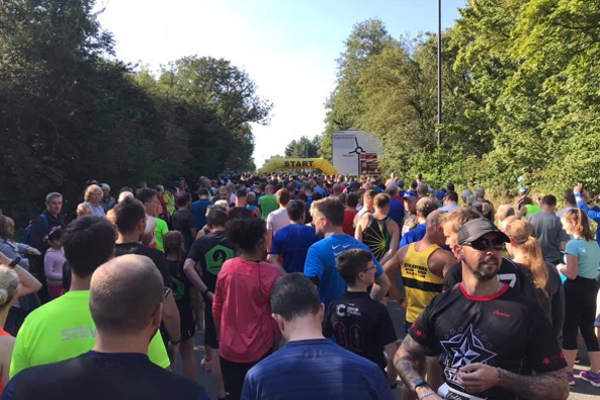 PB or not to PB was the question for runners on a fast, flat course at Stratford’s Big 10K (Sunday 8 September). They kept their eyes on the prize at this sold out event.

Now in its 11th year, Stratford’s Big 10K has grown in popularity to become a highly regarded race that attracts a good mix of club athletes, charity runners and those attempting the distance for the first time. Organised by Tempo Events it offered a scenic route that included the RSC Theatre, enthusiastic marshals, supportive atmosphere and a medal that met with everyone’s approval. Early autumn sunshine was a bonus.

The race started at 9.30am from Shipston Road close to Stratford Recreation Ground. Around 1,500 runners set off to the sound of the hooter, heading towards Milcote then continuing along the pancake flat Greenway, giving them the opportunity to up the pace on their way back to Stratford. They passed the Courtyard and RSC Theatres followed by a sprint towards the finish near the bandstand at the Recreation Ground.

Raymond Edgar of Lancaster and Morecambe AC was the winner in 31:44 with only four seconds separating him from Andrew Grant of Harrogate Harriers & AC who was second in 31:48. Paul Coon of Salford Harriers was third in 32:22.

Jane Evans of Knowle & Dorridge RC was the winning female in 36:40. Lucie Tait-Harris of Telford AC was second in 36:55 with Kelly Edwards of Leamington C & AC third in 37:01.

Every finisher was presented with an eye-catching medal and water and bananas were provided as post-race nutrition.

“Now bid me run and I will strive with things impossible (Julius Caesar Act 2 Scene 1)”.