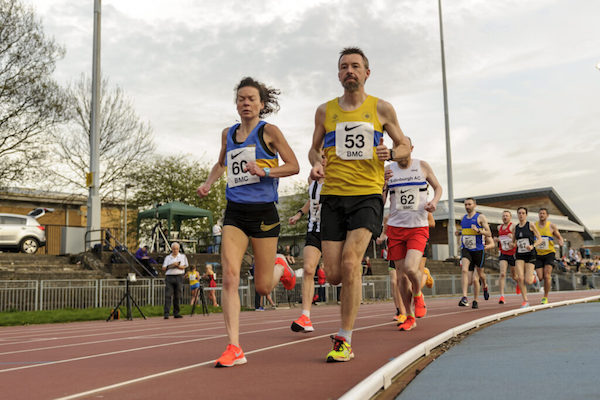 The event, hosted by the Glasgow Athletics Association, was held at Shettleston’s home track at Crownpoint. Just over 80 athletes signed up to take part in the championships, which made use of the services of eight pace-makers, with 53 finishing.

Last year’s men’s winner Lachlan Oates took home the gold again – something he must be getting used to after his wins at January’s XC at Stirling and the Scottish 10 Mile Championships at the Tom Scott Road Races last month. Following Oates were James Donald (Dundee Hawkhill) and Ryan Thomson of (Cambuslang), both of whom put in personal best performances.

Oates told scottishathletics: “I’m delighted to get a PB by eight seconds – that was the target. You don’t race 10,000m on the track all that often and I’ve decided against Highgate this year.

“Up until last year I was finishing second and third in National Championships, so I’m pleased with a bit of progress on that front and defending my title here. Stirling in the Inter-District XC and Strathclyde Park in the 10-Mile Champs also went very well.”

There was success for Shettleston in the women’s race too, as Fionnuala Ross took home the gold for the second year in a row. Following Ross were Elspeth Curran (Kilbarchan AAC) and her Shettleston clubmate Avril Mason.

Ross told scottishathletics: “I enjoyed that and it was good to win in a really good time for this point in the year. As it happens I am about a second away from the PB I set last year at Highgate Night of the 10Ks when I raced for Ireland in the European Cup.

“I’m not too disappointed to go so close. It shows I’m in good shape and I am looking forward to going back to Highgate in early July.”