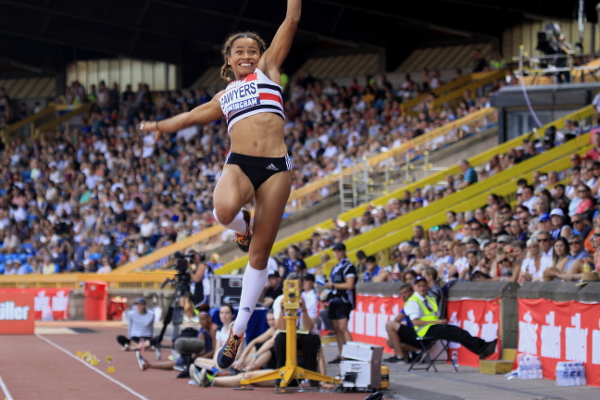 Jazmin Sawyers leapt to a second place and a PB on a weekend of outstanding performances by City of Stoke AC at the Muller British Championships (30 June – 1 July). The musical track and field athlete has also booked her European place in August.

The Alexander Stadium in Birmingham was the venue for the two day event and a showcase of young British talent who were competing for top honours. They were also vying for those all-important team places at the Athletics World Cup (14-15 July) and the European Athletics Championships (7-12 August).

Over 700 athletes took part including a contingent from City of Stoke AC. The line up included Jazmin Sawyers in the long jump, Ashleigh Nelson in the 100m and 200m, Alex Brecker in the 1500m and Kate Holt in the 5000m. Competition was fierce not least in sweltering temperatures with all to play for but the heat didn’t stop Stoke from posting impressive results.

Lorraine Ugen of Thames Valley Harriers won the long jump final with 7.05m and has been selected for the GB team at the Athletics World Cup in London. Singer/songwriter and 2014 Commonwealth Games silver medallist Jazmin Sawyers jumped to a new PB of 6.86m and will be on her way to Berlin to compete amongst a top quality field.