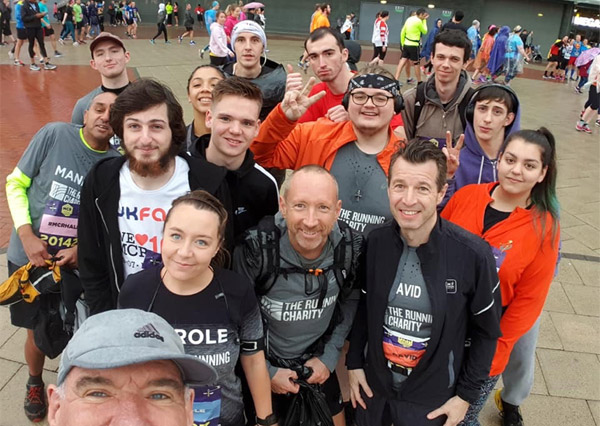 Wiggle Manchester Half Marathon is living up to its reputation as one of the most inclusive events on the UK running calendar with its support of 12 young homeless people (aged 16 to 25) who will be taking part on the big day – Sunday 13 October.

The Running Charity, the groundbreaking group set up in 2012, has benefitted as winners of a special lottery set up by event organiser's Human Race to offer places for just £1. The Running Charity's Manchester branch, which was created just four years ago, were allocated one of the £1 places (and received a 50% discount for 11 other places) and put together a team that has been working hard since.

Group leader George Bate is delighted with the progress of the team. He told runABC North: "We've been training for the past few months with regular group runs on Tuesdays and Thursdays from Media City. All of the guys have really come on and some are hoping to do the half marathon distance in under 1 hours 30 minutes. The others have more modest targets in terms of time but given that all of them have had serious problems to overcome completing the 13.1 mile course will, for most of them, be a remarkable achievement."

The Running Charity has worked with around 300 young homeless people across Manchester since it was established in the area by George in 2016. Many of them were struggling with addiction, rehabilitating after serving time in prison and coping with various mental health issues. They saw running as a lifesaver, providing positive social interaction, fitness and motivation.

George Bate continued: "Like all of the young people we are working with our Wiggle Manchester Half Marathon team members have had to deal with big handicaps to get where they are now. Young people like Alex who has overcome severe mental health struggles and was homeless at 17. Running gave Alex freedom and he went on to run London Marathon in 3 hours 10 minutes.

"Alex's story underlines how running is a lifesaver, great for the mind, giving people freedom and the chance to overcome hardships. Seeing that kind of success gives us all a boost."

Wiggle Manchester Half Marathon returns on Sunday 13th October, with 15,000 runners set to complete the 13.1 miles around Greater Manchester. Starting and finishing at Lancashire Cricket Club, this year’s route features a new section through Chorlton Village after passing through Stretford, Sale and Old Trafford on the way back to the finish line.

The half sees runners from beginner through to elite level raising funds for the Alzheimer’s Society, Cancer Research UK, The Christie, the Royal Manchester Children’s Hospital and other associated charities.

You can find out more about the work of The Running Charity on their website.

You can support the work of The Running Charity and dozens of other good causes at next year's Greater Manchester Marathon on Sunday 5 April, 2020. Details on the event website.