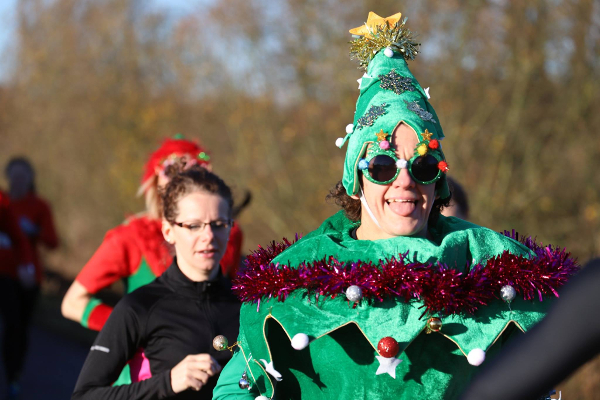 Runners put on a festive show at Tinsel Turbary 10K

Elves, Santas, Christmas trees and a turkey got the season of festive running underway at the Tinsel Turbary Trail 10K (Sunday 9 December). The only thing missing was snow!

There were blue skies and sunshine at this seasonal Trail 10K and Family Fun that started from Epworth Showground in North Lincolnshire. Now in its third year it was organised by Metres to Miles and offered something for every runner, from those aiming for a PB to others wanting a social run in fancy dress with friends.

Seasonal outfits were actively encouraged and there were prizes for the best costumes. One runner went for a ‘Beach Santa’ theme and carried an inflatable shark; another wore a giant inflatable turkey costume and managed to leap in the air at the finish.

The runners set off at 10.45am to follow a new distance of 10k on a course marked with tinsel. They continued along scenic trails and tracks across the Epworth and Haxey Turbary Nature Reserves and ran through a Santa’s Grotto before finishing back at the Showground.

Gary Crompton of Scunthorpe & District AC was first across the line in 38:40; nearly two minutes ahead of Andrew Humphries of Airecentre Pacers RC who came second in 40:33. Andy Lakeland of South Yorkshire Police AC was third in 40:51.

April Caufield of Halifax Harriers & AC was the fastest female in 43:35 and finished nearly four and a half minutes in front of Anne-Marie Pendrey who was second in 48:01. Pamela Tarbet of City of Hull AC came third in 48:34.

There was a commemorative medal, mulled wine and a mince pie for every finisher.