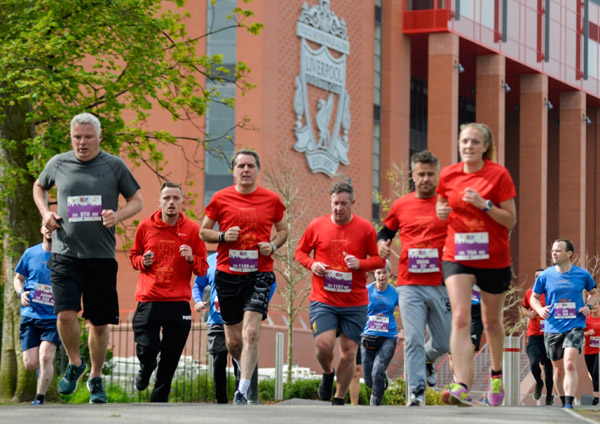 Runners around the world remember Liverpool's 96

An amazing field of 1,600 has been taking part in the sixth annual Run For The 96 5K today (Saturday 16 May). In 2020's coronavirus-influenced world the community legacy run is a virtual event but it has attracted huge home and international participation.

The original event was scheduled to take place in Liverpool’s Stanley Park – a fitting backdrop between the home grounds of Liverpool FC’s Anfield Stadium and Everton FC’s Goodison Park but now participants will follow social distancing guidelines as they complete a 5K close to home.

Run For The 96 is a community legacy event to celebrate the lives of the 96 Liverpool FC fans who tragically lost their lives in the Hillsborough disaster on 15 April 1989. The event also strives to remember the families of The 96 and the survivors.

Representatives from a number of Hillsborough families; the LFC Foundation; Everton in the Community; and Stanley Park CIC will also be running virtually.

Run For The 96 continues to have the support of the Hillsborough Family Support Group (HFSG). Official beneficiaries for 2020 are the LFC Foundation; Jamie Carragher’s 23 Foundation; Everton in the Community; and Stanley Park Liverpool CIC. Together, they support the vision of creating a legacy event to honour The 96 while ensuring local communities benefit. BTR Liverpool organise and deliver the event.

Participants are encouraged to generate sponsorship or donations through this year’s official fundraising page which can be found at the Just Giving website. All monies raised twill be split equally between the four named beneficiaries. Members of the public are also invited to make a one-off donation to support the charities.

Anyone making a donation through the official giving page will be entered into a draw to win a Jamie Carragher Liverpool FC shirt signed by the former player. Donations made before midday on 31 May are eligible for the draw.

Virtual run entries have been received from across the UK and around the world including numerous European countries plus Australia, Canada, China, Malaysia, Singapore, Thailand, United Arab Emirates, and United States Of America. Virtual runners have been sent their race number and medal. They have been asked to run in football club colours and send organisers BTR a selfie so they can be included in an online virtual gallery. Pictures should be sent to alan@btrliverpool.com

Due to current manufacturing restrictions, organisers are unable to provide event T-shirts this year – so the T-shirt fee has been donated to this year’s charity fund.

First staged in April 2015 to honour and remember The 96, the event has gone on to raise more than £25,000 for charity through donations and the fundraising efforts of its participants.

BTR Race Director Alan Rothwell commented: “We’ve had an incredible response for turning this year’s Run For The 96 into a virtual event – therefore still giving people the opportunity to run to remember The 96 wherever they are in the world. It’s genuinely overwhelming that given these strange times and the pressures we are all facing, that so many people across the world are taking the time this weekend to honour and celebrate the lives of The 96."