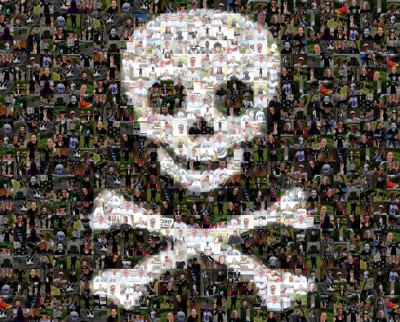 Pirates go on the run in GRIM Jolly Roger

Skull and crossbones buffs are the prizes for the keen crew of runners who took part in the Virtual GRIM Jolly Roger over the weekend (Friday 15 May to Sunday 17 May). Everyone heaved-ho in this pirate run and there was plenty of inventiveness when it came to the black and white theme.

The success of their rainbow-themed event led organisers It’s Grim Up North Running to repeat the formula but with a different colour scheme this time. It would also act as a motivator to anyone who had recently lost their running mojo and needed a nudge in the right direction.

They launched the Virtual Jolly Roger, a three day event where runners wore Black on Friday, White on Saturday and something Black and White on Sunday. Pirate fancy dress was definitely encouraged and this correspondent along with many others got into the spirit of the occasion.

Runners could choose their distance – while still following the guidelines about social distancing – and shared their achievements on the It’s Grim Up North Chat Group Facebook page using the hashtag #grimjollyroger. They uploaded photos of themselves in the designated colour of the day and creativity came to the fore. There were black and white race T-shirts, leggings, bandannas, eye patches and the odd parrot or two, along with Be the Rainbow Run the Rainbow T-shirts.

Thanks go to the team at It’s Grim Up North Running for another well-run event. This week is Virtual Key Worker Kindness - a show of appreciation for those people whose hard work and efforts are helping to keep the country going in this crisis.