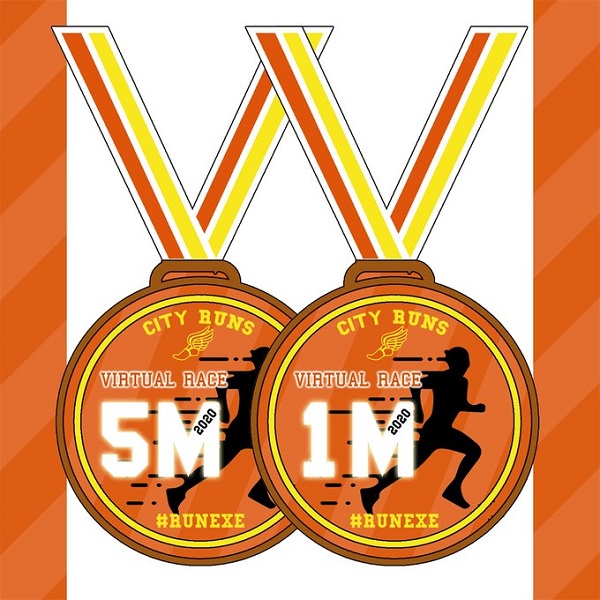 With their annual Run Exe 5K monthly series due to run from March to September, race promoters City Runs Events were early adopters of the virtual run concept and have taken things to a new level, with weekly virtual runs, full results lists and even virtual medals to collect!

While the popular Run Exe 5K Series, normally held on the first Tuesday of the month, is suspended until at least 2 June 2020, a steady stream of challenges are being issued from City Runs Events.

Last year's champions in the 5K series were Jamie Barnett (Teignbridge Trotters) with a best of four race total of 1:03:13. Sam Hopton (South West Road Runners) was only eight seconds behind after 20K of racing and Berihu Hadera (Exmouth Harriers, 1:04:09) was third.

There were 114 finishers with four qualifying races in 2019 and 5K times ranged from 15:48 to 38:33 on the favourable course on footpaths and cycle tracks around Exwick Playing Fields and River Exe Flood Relief.

The virtual challenges commenced last month with a standard 5K, run anywhere before 25 March. This was followed by a 5 miles and/or one mile challenge last week and has moved swiftly on to a 3K and/or 1K time trial this week.

All runs must be completed solo and in accordance with all Government and Public Health guidelines. Impressively personalised virtual medals can be downloaded from the City Runs Virtual Races website here

Looking ahead there are plans to hold a virtual 4x4K relay (run solo, of course) as a team challenge between 15-17 May 2020, subject to Government guidelines at the time.

Full details and results to date for this brilliant initiative are available here.