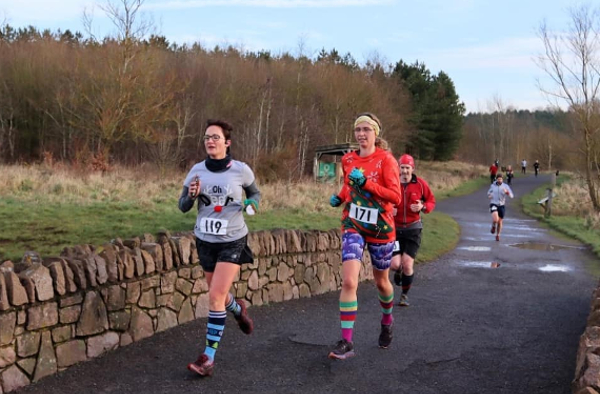 Run around the clock at the Poplar Challenge

Extra mince pies at Wednesday’s (11 December) Poplar Challenge went down a treat with runners after completing muddy laps around Sence Valley Forest Park. They were made to work for them on a beautiful yet demanding course in Leicestershire.

The Poplar Challenge was the fourth and final race in the inaugural Forest Series from Big Bear Events – the other three were the Oak Challenge (Hicks Lodge), Pine Challenge (Rosliston Forestry Centre) and Birch (Cannock Chase). They’ve been a hit with runners due to the locations, friendly atmosphere and support throughout.

These races are lap based. The Poplar Challenge – named after an abundance of these trees along with pine and larch in Sence Valley Forest Park – required participants to complete as many 2.8 mile loops as they chose within a 6-hour time limit.

They could run a 5K, 10K, Half Marathon or a Marathon on a mostly flat course, apart from a long climb and descent, with superb views across the lakes. The route itself consisted of crushed stone path along with a few grass sections and mud. The inclement weather in the days preceding the event resulted in the claggy stuff and trail shoes were a must!

Several entrants were unable to take part due to illness - as is, unfortunately, often the case at this time of year. Those who made it took advantage of the dry weather in this stunning forest and encouraged each other as they chipped away at the laps whilst the clock ticked.

A medal and mince pies awaited them and for those who have completed all four events in the series, there were awards for the most laps completed and time on feet.