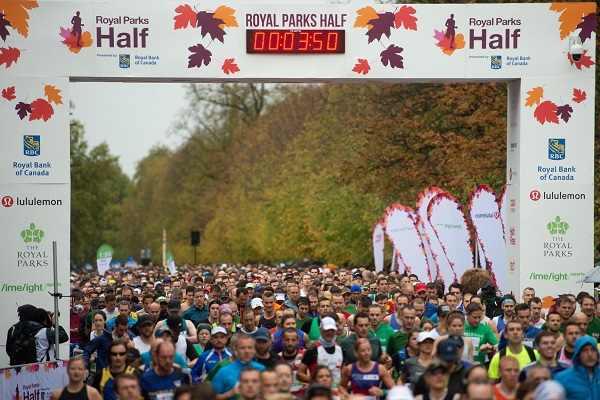 Raising standards and funds in record Royal Parks Half Marathon

A record entry and more than 16,000 finishers made the 11th Royal Parks Half Marathon an even more spectacular occasion on Sunday (14 October). This race traverses four of London's eight Royal Parks and the overall event has now raised more than £35 million for nearly 1,000 charities since 2008.

The stunning Royal Parks Half Marathon course takes in many of the capital's world famous landmarks on fully closed roads including Buckingham Palace, Trafalgar Square, Royal Albert Hall and the Houses of Parliament, plus sections of Hyde Park, The Green Park, St James's Park and Kensington Gardens.

Radio presenter Jo Whiley was among the many celebrities who competed and excitedly posted this on Twitter: “Humongous thanks & heartfelt CONGRATS to all @RoyalParksHalf runners & supporters today. Every single cheer of encouragement was appreciated, especially around mile 9 when I was REALLY struggling. I’m so glad I do sporty stuff. It enhances my life so much. Umm. That’s it really”. Jo narrowly missed her two-hour target (2:05:19) after running 1:59:04 last year and was close to the mid-point finish time runner as 16,356 finished.

Defending Royal Parks champion James Hoad (Bedford) had to settle for runner-up honours on this occasion as Samatar Farah (1:10:52) edged ahead in the colours of his charity Scope. Hoad, representing BP in the Corporate Challenge, was 13 seconds in arrears and Tom Jervis (BP, 1:13:56) was third.

In a sign of improving standards and to demonstrate the potential of this fast course there were almost 420 runners below 90 minutes, 60 more than last year, despite some very breezy conditions in the capital.