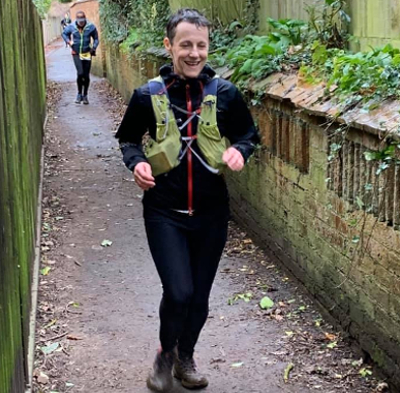 Round of applause for new Worcester Ring Run

First class organisation and resolute marshals ensured the new Worcester Ring Run (Sunday 9 February) went without a hitch in spite of the extreme conditions. Medal, goodies and real ale courtesy of sponsor Teme Valley Brewery were the runners reward for their perseverance.

The Worcester Ring Run was a new, 23-miler from Pulse Events that made its debut on a cold, wet and windy day in the Midlands. It took participants on an anti-clockwise tour around Worcester and Droitwich with the majority of the course traffic-free. The rest of it was held on minor roads and lanes.

Starting and finishing at Droitwich Leisure Centre, a determined band of runners set off at 9am, many remaining cheerful as they battled through wind, rain and mud. One runner, Lauren Cooper leapt over a puddle in what was the photo of the day and followed this with a second lady finish.

Equally cheerful were the volunteers who provided support and encouragement with smiles on their faces as they braved the awful weather to keep everyone safe and sound.

They ran alongside the Droitwich canal then onwards to Worcester via Bevere and Pitchcroft. They continued along the river, over Diglis Bridge then north along the Worcester & Birmingham canal and back towards the finish at Droitwich.

This event supported St Richard’s Hospice and a percentage of the Senior entry fees was donated to the charity.