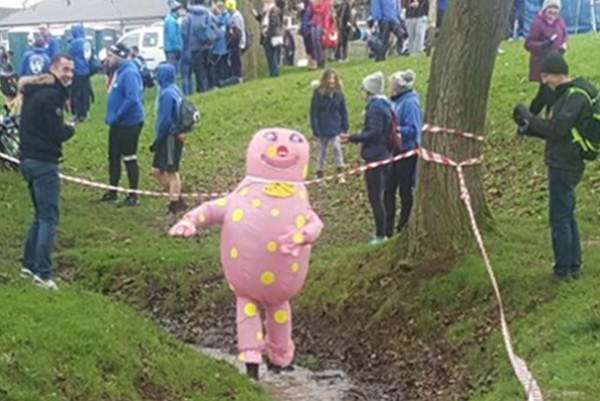 Rollicking Tale From The Riverbank

It was a rip-roaring time at the Riverbank Rollick (Sunday 14 January) as runners had fun in the mud, over the stiles, up the hills and through the stream. Mr Blobby joined in the fun too.

The Riverbank Rollick is a 9-mile off-road race on bridle paths, fields, trails and woodland and with mud and hills to contend with, is physically demanding yet mentally rewarding. One of three events organised by Thornbury RC and known for its challenging terrain, scenic views, costumed marshals and the post-race refreshments. The popularity of this race is such that entries sold out in less than a week.

One of the highlights was the marshals who wore a variety of fancy dress that included Mr Blobby and were praised for their professionalism, friendliness and helpful attitude. This was especially the case for one female runner who was looked after by the marshals when she withdrew from the race due to feeling unwell. Their actions were much appreciated and along with their support and encouragement in general were given a ‘thumbs up’ by everyone.

Marcus Mumford of Evesham Vale RC was first across the line in 57:25, only three seconds separating him from Anthony Glover of Westbury Harriers who was second in 57:28. Glover’s teammate David Hobbs came third in 57:40.

Annabel Granger of Bristol & West AC won the women’s race in 1:01:36 followed by Sandra Chipper of Lliswerry Runners in 1:03:22. Sophie Voller of Westbury Harriers was third in 1:05:28.

Lisa Heal was the midpoint runner in 1:30:22. A full set of results can be found on our race listings page.

An eye-catching medal, delicious cakes and a nice cup of tea were the perfect end to the day.