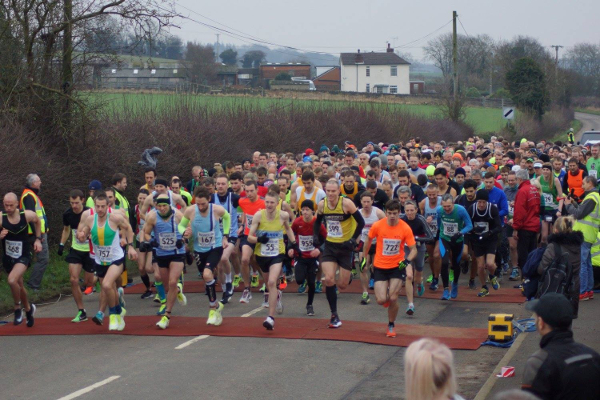 Bickerstaff On The Double At Bolsover

Heanor RC athlete Bickerstaff won last year’s race in 32:58 and was keen to repeat this at the 2017 Bolsover 10K, due to take place on 10 December. Unfortunately, icy conditions and a forecast of snow meant that the race had to be postponed. The event was rescheduled for the 14 January 2018 and this time, the weather was kind to the organisers (North Derbyshire RC) and runners resulting in perfect conditions for a PB.

The men's winner was almost a minute faster this year, crossing the line in 31:56 to take first place ahead of Anthony Woodward of Notts AC, second in 32:28. Ben Plummer of Barrow Runners was third in 33:34.

In the women’s race, Michelle Willcocks powered her way to victory in 37:43. A Team GB triathlete, she suffers from ulcerative colitis and underwent major surgery in 2011 but hasn’t let her illness stop her from training and racing. She continues to improve and in 2017 won gold at the European and World Triathlon Championships in what was a stellar year for the Sutton in Ashfield Harrier.

Rebecca Gallop of Newark Striders RC was second in 37:59 with Jenny Knass of Stockport Harriers third in 39:27.

The last runner finished in 1:42:28. A full set of results can be found on our race listings page.

There were trophies for the male and female winners, age category prizes and vouchers for the first three men and women courtesy of race sponsor Derby Runner.