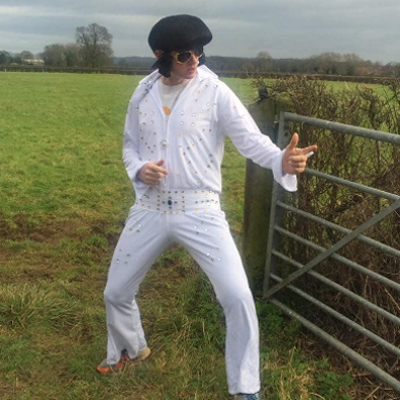 Rock and run at Riverbank Rollick

It was now or never for 450 runners waiting to start at Sunday’s (13 January) Riverside Rollick. The King of Rock and Roll was amongst the marshals who helped them on their way.

With a revised route of 10 miles and a new race HQ there was plenty to look forward to at the Riverside Rollick, a popular race that sold out within 24 hours. Organised by Thornbury Running Club it was a dry affair this time – a contrast to previous years where mud has been the main feature. Instead, runners were treated to dry conditions underfoot that made the going a little bit easier although the course as ever was testing

The majority of the race was off-road, across fields, through woodland and along trails and bridle paths in stunning countryside in South Gloucestershire. Everyone was in high spirits especially the marshals who wore an array of costumes that put a smile on the entrants faces. A chicken, sumo wrestler, Big Bird and Bananaman were some of the outfits on display and they were joined by Elvis Presley aka Martin Smith in the King’s trademark white jumpsuit.

Vicky Tester of Westbury Harriers was the fastest female in 1:10:57 with Susan Duncan of Weston AC second in 1:11:27. Niki Morgan of Chepstow Harriers was third in 1:11:42.

There were 448 finishers. They were rewarded with a medal, coffee and cake for their efforts and vow to return next year.