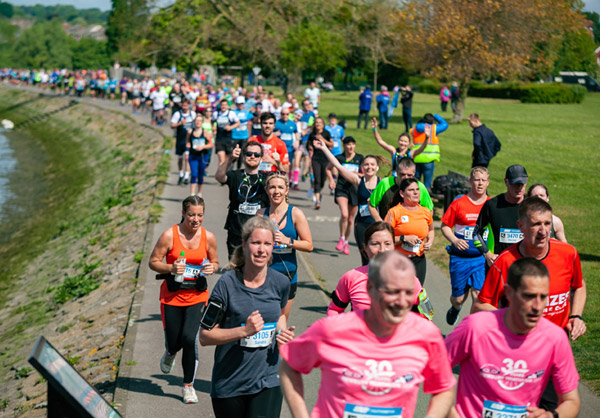 With just three months to go until ABP Southampton Marathon (Sunday 26 April) organisers have announced that they are on target for a record turnout at this year's event. And they are expecting a global field including participants from six different continents.

Dan Rourke told runABC South: "A surge of sign-ups earlier this month has combined with increased interest since entries opened last summer and we're now looking at this year's ABP Southampton Marathon, Half Marathon & 10K being the biggest ever. We're also still hoping for an entry from Antartica to complete a set of seven continents!"

Dan reckons that Southampton's status as one of the most popular alternatives to London Marathon (both events will be staged on the same day in 2020) has led to the bumper entry.

He continued: "Excitement is beginning to build in the city and across Hampshire and the south coast as training programmes intensify and more and more runners sign-up to run for one of the many good causes that will be represented on the day.

"Our two lead charity partners Macmillan and Southampton Hospital Charity (SHC) will both be fielding big teams on race day. If you'd like to join either of them, or one of our other good causes, they would be delighted to hear from you. Charity places are still available, or for runners who have already entered, pulling on the Macmillan or SHC vest will make race day extra special."

Dave Kinloch, an advanced nurse practitioner at University Hospital Southampton, took part in the 10k last year and is now going a step further in 2020 in the half marathon: "My experience shows that it is do-able to sign up in January and run a race in April. Just remember that there is only one person in the race, and that’s you. I'm supporting SHC as there are some people very dear to me who have been treated at this hospital.”

As the countdown to the big April race builds up, ABP Southampton Marathon's official education partner Solent University will once again be staging a Meet the Experts evening on Tuesday 25 February at the Spark Building.

The programme includes the bio-mechanics of running - top tips and quick wins to boost performance and reduce injury risk; demystifying heart rate variability for runners; and psychological skills for endurance sports. In addition there is a Q&A and options for an interactive activity. You can book a place at Eventbrite.

Southampton has a growing reputation as a well-organised event which – with its full, half, 10k and fun run options – has something for every runner and their family and friends. There's a great buzz in the city on the day with the crowds providing great support throughout.

Marathon runners will enjoy a fantastic tour of Southampton. Highlights are the city centre start/finish, the dramatic Itchen Bridge crossing; a visit to St. Mary's Stadium, riverside vistas and parkland stretches through Southampton Common. The event has a great course profile with a few challenging hill sections but still offering PB potential.

ABP Southampton Marathon organisers also want to expand their team of highly-regarded mile makers and are looking for volunteers to help marshal routes and work at water stations and in the finish distribution areas. A 'marshal one, get one free' offer means complimentary entry into a future event while groups of volunteers (20+) will also receive a thank you donation to their club or charity.