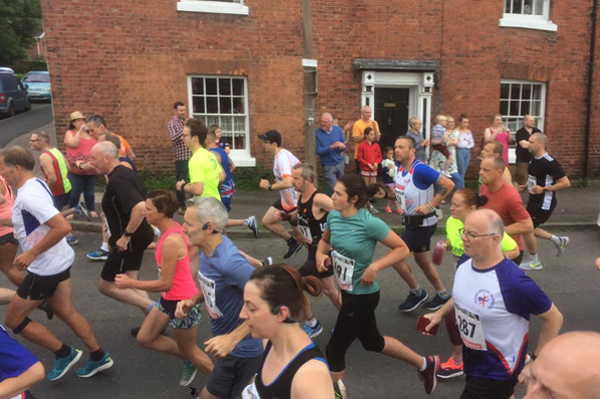 Record numbers for Shifnal Half

Sunday’s (30 June) Shifnal Half Marathon attracted its largest entry to date including one lady who had travelled from Canada. She was amongst over 230 runners who took on a tough race for a good cause – Bloodwise.

In what appeared to be a repeat of last year’s weather, the Shifnal ‘Steeplechase’ Half Marathon was held on a hot day to fundraise for Bloodwise. This race is a favourite with the local running community and also has a tradition of attracting overseas athletes who in this case was Pam Herbert Maindonald from Canada. She was visiting family in the UK and made the journey to Shropshire to run 13.1 miles in an attractive location.

Runners congregated at Idsall School/Sports Centre, Shifnal before making their way to the start in the town centre. They set off at 10am and into the countryside to follow a hilly, multi-terrain course between four village churches in Shifnal, Ryton, Beckbury and Kemberton. The organisers had taken the conditions into account and ensured there were water stations every two miles to keep fluid levels topped up.

Pravesh Patel of Wolverhampton & Bilston AC was first across the line at Idsall Sports Centre in 1:18:02. Paul Monaghan of Greenock Glenpark Harriers was second in 1:18:29 followed by Richard Price of Shropshire Shufflers in 1:22:37.

Wolverhampton & Bilston AC took the top spot in the women’s race with Tessa Clarke winning in 1:27:44. Lauren Morley of Shrewsbury AC came second in 1:34:14 and Gemma Mallett of Croft Ambrey RC third in 1:37:50.

The Apley Farm catering van was a welcome sight at the finish.