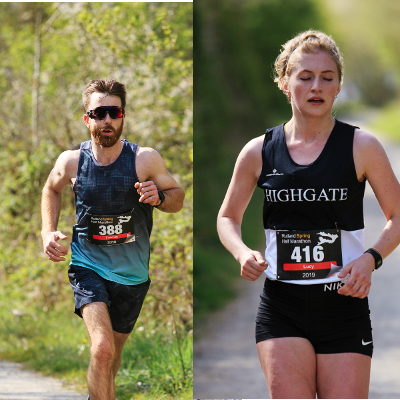 Both the men’s and women’s course records were broken at Sunday’s (14 April) Rutland Spring Half Marathon and it was a close finish between the top two men...

This race made a winning debut in 2018 and expectations were high ahead of this year’s event. For those runners who completed last September’s Half Marathon it was their opportunity to experience the second half which together, comprises the Rutland Marathon course.

Whichever they opted for, the runners were treated to a scenic, multi-terrain route around Rutland Water Nature Reserve including the stunning Bluebell woodland that looked out over the surrounding countryside. The iconic Normanton church formed a backdrop as they tackled a few ups and downs. However, the well stocked feed stations and the cheerful marshals kept them going until the end.

There were outstanding performances by the top three men who all broke the existing course record of 1:22:15. Thomas Loe and Connor McArdle of West End Runners battled for first place with Loe the winner in 1:19:39, only seven seconds separating him from McArdle who finished in 1:19:46. Russell Tapping was third in 1:20:38.

An equally impressive Lucy Thraves of Chichester Runners & AC won the women’s race in 1:26:56, beating the 2018 record of 1:32:29 by over five minutes. Keira Hinshelwood of Highgate Harriers was second in 1:32:14 and also beat the course record. Her teammate Catherine Airey was third in 1:32:35.

Another noteworthy performance was by blind runner Haseeb Ahmad of Race Hub who with his guide Andy Salmon finished in 1:32:01. Ahmad was part of the GB Paratriathlon team and broke the world Blind Ironman record in October 2016.

A beautiful medal, T-shirt, athlete recovery area and cake rounded off a perfect day for many.