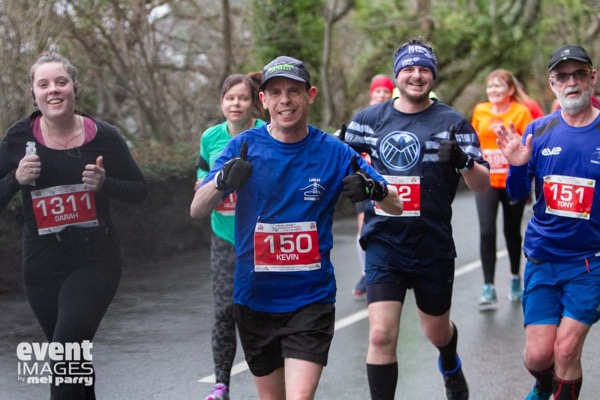 It may not have been the kindest day on the weather front yet Anglesey still provided the picture book setting as the island celebrated its eighth year of hosting their popular half marathon on Sunday (3 March). Close to 2500 runners competed across Always Aim High’s Jones Crisps Anglesey Half Marathon and accompanying 10K race to making it a record breaking event, with competitors reveling in a start point at the iconic Menai Suspension Bridge.

Flowing downhill through Menai Bridge town centre, the half marathon route moved along the winding closed roads to Beaumaris, flanked by breathtaking views of the Snowdonia National Park and the Menai Straits. The course then returns to the finish line in the centre of Menai Bridge.

It was third time lucky for Gwyn Owen of Eryri Harriers who claimed his first victory having competed in the previous two events. Owen (1:13:45) prevailed in a close contest with Simon Cole (1:13:53), while Gary Wyn Davies took third in 1:15:50.

Owen later said of his victory: “This is my third time running the Anglesey Half Marathon, I'm delighted to say I've won it for the first time today. Of course I was worried it was going to be really windy but to be fair conditions weren't too bad during the half marathon and it wasn't windy at all.”

The Jones Crisps Anglesey 10K saw over 600 compete and featured much of the same coastal route as the half. Taking the honours in the women’s race was Katie Reynolds of Bangor University AC in a 38:36, while Gwion Roberts secured first in the men’s competition in 32:24.

Tim Lloyd, Director of Always Aim High Events, the race organiser said: “We always look forward to the Jones Crisps Anglesey Half Marathon & 10k, it’s a great way to kick off our season. The reaction we get from our participants is one of the highlights of our year.

“The promise of bad weather and rain didn’t dampen any of our runners’ spirits and it really is incredible to see the look of achievement on their faces when they cross the line. We’re immensely proud that we can give a platform to runners raising money for all sorts of different worthy causes too.

“We’d like to thank all of the race partners, in particular the headline sponsor - Jones Crisps, and Anglesey County Council for their continued support. As well as all of the local communities that turned out in their hundreds to support the runners around the course.”