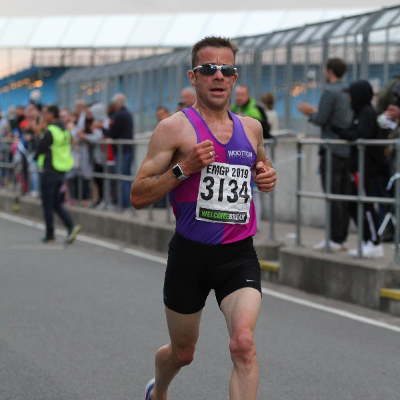 1250 runners roar round the track at Silverstone 10K

The Silverstone Grand Prix 10K was organised by Silson AC and has been held at this iconic race circuit since 1984. It is the last of 8 races in the East Midlands Grand Prix (EMGP) series and the Northamptonshire AA 10K Championship 2019 for the third year in a row, making it a highly competitive event.

Waiting for the runners, wheelchair and handcycle athletes was a two lap, fast and flat course held on the Grand Prix ‘Bridge’ circuit, starting on the main grid at 6.30pm. They zoomed off around the circuit with cheers from marshals and spectators including high-fives from a group of youngsters under the bridge. They finished in the Pit Lane.

Winner of the Milton Keynes Marathon, Michael Aldridge of Wootton RR showed he was equally adept at shorter distances, winning in 32:10 and breaking the course record for his age group. There was no bottle of champagne for him to spray over everyone as part of a victory celebration; however, he was presented with a cash prize for his new age group record. Dominic Jones of Rugby & Northampton AC was only three seconds behind, finishing second in 32:13 followed by teammate William Gardner in 32:34.

Alice Ritchie of Marshall Milton Keynes AC won the women’s race in 37:01 followed by Emma Ford of Kenilworth Runners in 38:13. Kelly Barnett of Wellingborough & District AC was third in 39:24.

There were 1244 finishers who each received an eco-friendly medal, made in the UK from sustainable wood.