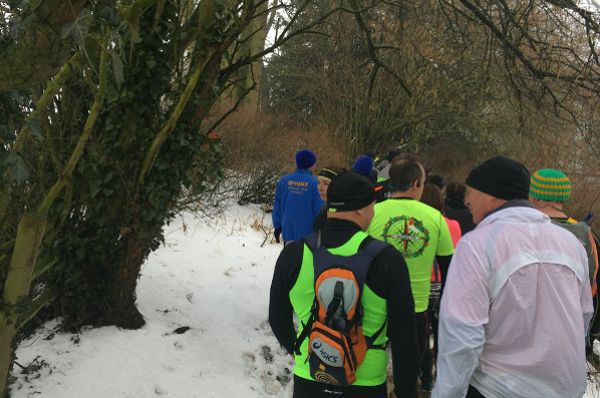 Pushing On And On At Peatling

When runners were advised to wear more than a vest and plimsolls at Sunday’s (4 March) Peatling Challenge they knew it was going to be a tough day. Not forgetting the bonus mile or two in the half marathon.

While most races were cancelled because of the weather the Peatling Challenge went ahead as arranged and attracted a hardcore group of runners and walkers that included dogs as well. This friendly, inclusive event offered a choice of three distances: 1 mile (The Mile) for youngsters and their parents, 7 miles (The Seven) and 13 miles (The Thirteen) for those wanting a scenic walk or run around the South Leicestershire countryside. The half marathon route was changed by the organisers to 14 miles then 14.8 miles possibly due to the snow.

All three races were held in Peatling Parva and the surrounding villages on a multi-terrain route with gates, stiles, snow and clay-like mud for the entrants to contend with. There were prizes for the first and second man and woman in the 7 mile and 13 mile events and tasty medals for all finishers including youngsters.

The energy expended on the tough terrain was replaced by tea, cake and other delicious refreshments at the village hall.